A corner of the universe / Ann M. Martin. 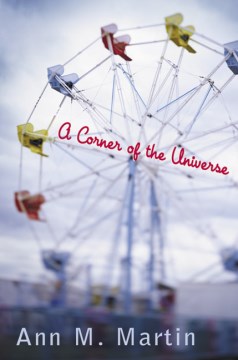 /*Starred Review*/ Gr. 6-8. It is 1960, Hattie Owen is about to turn 12, and her world is about to be turned upside down. She loves her small town and the boarding house her parents run (enabling her father to pursue his art), in part because of the security and familiarity her surroundings represent. The boarders seem to be as much a part of the family as her grandparents, who live in a mansion and literally look down their noses at the Owens. But Hattie's perceptions of life in general--and her life in particular--change when 21-year-old Uncle Adam returns to town after his residential school closes. Adam seems to be manic-depressive, and he's a savant when it comes to dates. He's news to Hattie, but he mostly delights her, and she feels she can help him. His problems, however, are more than anyone--including Adam--can handle. The book's message--that people like Adam help "lift the corners of the universe"--is passionately offered, though perhaps too oft repeated. It is Martin's characters that shine, especially Hattie, who is trying to feel her way through family secrets, and Adam, whose valiant efforts to forge a life for himself are as uplifting as his failures are heartrending. The supporting characters are strong pillars that hold up the rest of the story, and their subtle depictions provide a depth that makes it much more than a "problem novel." This is a fully realized roller coaster of emotions, and readers take the ride right along with Hattie. ((Reviewed December 1, 2002)) Copyright 2002 Booklist Reviews

Twelve-year-old Hattie's ordinary summer is upset when two strangers come to town: her hitherto unrevealed uncle Adam, who suffers from an unspecified mental illness, and Leila, a girl traveling with an itinerant carnival. Evoking the intricacies of friendship, Martin also understands its perils--the gravity of which becomes apparent in the book's terrifying climax. Taking on serious concerns, this book is also what kids want when they ask for ""a book about friends."" Copyright 2003 Horn Book Guide Reviews

Declining, as she always does, both her best (and only) friendÆs invitation to Maine and her grandparentsÆ offer of summer camp, Hattie plans to spend the summer of her twelfth birthday in her hometown. She likes to wander the townÆs few streets, visiting the library and her grandparents and her favorite stores, but always staying close to home, which is in her case a boardinghouse run by her parents. But HattieÆs desired ordinary summer is upset when not one but two strangers come to town. First to arrive is her hitherto unrevealed twenty-one-year-old uncle Adam, who suffers from an unspecified mental illness that makes his conversations an enthusiastic mTlange of sense, nonsense, and word-perfect dialogue from the I Love Lucy show (the book is set in 1960). Hattie is convinced that no one understands him as well as she does: ôI feel a little like AdamÆs baby-sitter, a little like his mother, not at all like his niece, and quite a bit like his friend.ö The author balances this friendship with another that Hattie, surprising her shy self, begins with a girl traveling with an itinerant carnival-LeilaÆs father runs the Ferris wheel and her mother is the ôPretzel Womanö in the sideshow. Martin excels at evoking simply the intricacies of friendship, what it enables you to give to others, and what it teaches you about yourself. She also understands its perils. Trying to offer Adam the freedom and happiness she believes is wrongly denied him by his parents, Hattie relates to him as she would a fellow child-a mistake whose gravity becomes apparent in the bookÆs terrifying climax. Told in the present tense in HattieÆs personable voice, the story takes on serious concerns but has equally strong standing as the kind of novel kids mean when they ask for ôa book about friends.ö Copyright 2003 Horn Book Magazine Reviews

Martin (Belle Teal; the Baby-Sitters Club series) hints at a life-changing event from the first paragraph of this novel narrated by a perceptive and compassionate 12-year-old, and set in the summer of 1960. Hattie Owen had been anticipating a summer as comfortably uneventful as all the others ("I just want things all safe and familiar," she admits), helping her mother run their boarding house, painting alongside her artist father and reading "piles" of books. Then Uncle Adam (whom Hattie never knew existed) makes a surprise entrance, turning everything upside-down. Hattie's mother says that Uncle Adam has "mental problems." Hattie's grandparents act embarrassed whenever he is around, and her peers laugh at him. The author authentically conveys the ripples Adam sends through this small town. The heroine is continually amazed by his outlandish antics, moved by his sudden mood changes and secretly wonders if she and Adam might be kindred spirits. Hattie finds adventure and tragedy as well as enlightenment as she "lifts the corners of [her] universe" in order to better understand Adam. With characteristic tenderness and wisdom, the author portrays the complex relationship between the sympathetic heroine and her uncle ("I feel a little like his baby-sitter, a little like his mother, not at all like his niece, and quite a bit like his friend"). Readers will relate to Hattie's fear of being as "different" as Adam, and will admire her willingness to befriend an outcast. Hearts will go out to both Hattie and Adam as they step outside the confines of their familiar world to meet some painful challenges. Ages 12-up. (Oct.) Copyright 2002 Cahners Business Information.

A 12-year-old girl had been anticipating a summer as comfortably uneventful as all the others-until her uncle with "mental problems" makes a surprise entrance, turning everything upside-down. "Hearts will go out to both as they step outside the confines of their familiar world to meet some painful challenges," wrote PW in a starred review. Ages 12-up. (Jan.) Copyright 2004 Reed Business Information.

Ruby in the skyFerruolo, Jeanne Zulick

Sure signs of crazyHarrington, Karen, 1967-

The same stuff as starsPaterson, Katherine