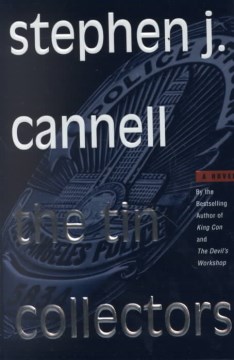 LAPD Sergeant Shane Scully intercedes in a domestic-violence situation involving his former partner Ray Molar and Molar's wife, Barbara, who was once Scully's lover. The confrontation ends with Molar dead and Scully in big trouble. Molar, who was tight with LAPD's upper brass, apparently was holding sensitive material about the department, which is now missing. The brass senses that Scully may be using the material as future leverage against possible murder charges. Facing suspension, Scully is mystified when instead he's suddenly transferred to Internal Affairs. In trying to clear his own name from inside IA--whose officers are known as "tin collectors" for their efforts to strip fellow officers of their badges--Scully ferrets out a weblike conspiracy of corruption that extends to the highest levels of L.A.'s municipal government. Cannell, formerly an Emmy-winning television producer of such shows as The A-Team, The Rockford Files, and Silk Stalkings, recently has become the best-selling author of such thrillers as The Plan (1995) and Final Victim (1996). Both his fiction and his television shows share likable protagonists, strong female characters, solid plots, and more than a little humor. Readers who enjoy cop novels by Robert Daley or William Caunitz will find Cannell right up their dark, dangerous alley. --Wes LukowskyCopyright 2000 Booklist Reviews

Author (King Con) and Emmy Award-winning TV writer Cannell (The Rockford Files) continues his string of commercially appealing suspense novels with an offbeat, action-driven police drama about high-level corruption in the LAPD. This time around, Cannell fans will discover a refreshing and newly sprung concern for his characters' motivations. Sgt. Shane Scully, a well-decorated L.A. detective, receives a late-night phone call from Barbara Molar, a former girlfriend and current wife of Shane's ex-partner, Ray. Ray has a history of violence, and right now he is trying to kill Barbara. Without waiting for backup, Shane runs to the rescue and is forced to kill Ray in self-defense. Fully expecting to be vindicated after a routine debriefing, instead Shane finds himself persona non grata with fellow officers and the mayor. He's a murder suspect, and he's accused of stealing sensitive case files that Ray was working on at home. The case is referred to Shane's former nemesis Alexa Hamilton, a legendary "tin collector" at Internal Affairs. In a subplot, Shane helps out Sandy Sandoval, a call girl turned police informant, with her confused, angry son. Sandy is involved in a sting operation and enlists Shane's help as a role model for 15-year-old Chooch, who is on the verge of being expelled from private school. While helping Chooch mature and defending his own career, Shane suddenly discovers that Alexa is really a secret ally. The pair, now tentative lovers, follow a convoluted trail exposing political land graft. Exhibiting a new sensitivity to his characters' emotional depth, Cannell continues to improve as a novelist. (Jan. 13) Forecast: Recent revelations about corruption in the LAPD add credence to Cannell's story. An excerpt in the Avon paperback release of The Devil's Workshop (Nov.) should pique advance interest, while major ad/promo, including a national author tour, and a bold dust jacket will help when the book hits the shelves. Audio rights sold to Brilliance. Copyright 2000 Cahners Business Information.