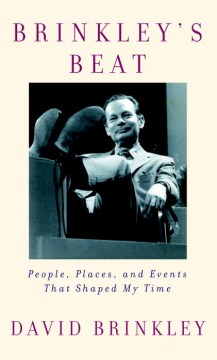 In this posthumously published memoir, Brinkley's well-known wry perspective is brought to bear on some of the most notable people, places, and events of his 50 years in television news. Brinkley came to Washington, D.C., in 1943 to begin a career that would put him in contact with an array of memorable figures, including Mississippi Senator Theodore Bilbo, whose career was "distinguished by its unabashed racism," and Congressman Martin Dies, the original architect of the House Un-American Activities Committee. Brinkley covered 11 presidents during his career but profiles only 3: cunning, energetic Lyndon Johnson; Ronald Reagan, whom Brinkley found impenetrable, "a man who filtered reality through a set of assumptions and preconceptions that he refused to question"; and Bill Clinton, coming to office with great promise but ultimately as overestimated as president as he had been underestimated as a candidate. The places Brinkley recalls include Normandy in 1944 and 1994 and black-and-white Birmingham, Alabama, in the 1960s. Given his longevity as a television journalist, his access to the powerful and influential, and his own sardonic perspective, Brinkley offers an engrossing look at the most fascinating people and events of the last half-century in a fitting capstone to his memorable career. ((Reviewed September 15, 2003)) Copyright 2003 Booklist Reviews

U.S. history, up close and personal. Brinkley finished this just months before his death. With a 200,000-copy first printing. Copyright 2003 Reed Business Information.

Brinkley, one of America's best-known broadcast journalists, died shortly after completing these reflections on the people, places, and events that shaped his world. He opens by acknowledging his attraction to the ridiculous, a fitting entree when one considers that, in addition to the serious and even tragic news that he covered, he never ignored the foolish and pretentious side of life. This sense of humor shines through in his writing. The section on people is bookended by two Southern politicians who mark the beginning and the end of his Washington reporting career: Bilbo and Clinton. Mississippi Senator Thomas Bilbo served as the unofficial mayor of 1943 Washington, DC, and Brinkley credits him with making explicit the bigotry that existed under the city's genteel facade. Bill Clinton may have been a bore (as Brinkley accidentally attested on live television), but Brinkley's final assessment is that he was a better president than many think. The places he goes on to cover reflect his interest in World War II, civil rights, and foreign policy. His lament on the transformation of the political convention from an exciting and unpredictable circus to a closely scripted political event reveals his deep interest in politics and his trust in the good judgement of people. Most libraries should purchase. [Previewed in Prepub Alert, LJ 7/03.]-Judy Solberg, George Washington Univ. Libs., Washington, DC Copyright 2003 Reed Business Information.

This volume serves as an appropriate remembrance of the acerbic longtime NBC News and, later, ABC, anchorman, who died in June. A journalist since 1938, Brinkley was an unusual figure in American life: a mainstay media personality whose defining trait was intelligence and good judgment. The subtitle serves as an exact description of the table of contents, as the book indeed does begin with personalities (Hoffa, Reagan), then recounts some of his travels (Hong Kong, Vienna) and closes with reflections on events like the Kennedy assassination. As befits memories of a Washington journalist, the "People" section focuses almost entirely on Washington political creatures, some of them obscure (e.g., Martin Dies, May Craig). The sketches are purposely brief, verging on perfunctory: Brinkley consciously keeps his remarks on the surface, so only some of the sketches have compelling insights to offer. The sketch of Bobby Kennedy, a friend of Brinkley's, is a notable exception, capturing the split nature of his truncated career. Brinkley's skill at handling tone is better displayed in the final two sections. His thoughts about the men who made sacrifices at Normandy in 1944 are very moving; writing about the Mediterranean, he is appropriately charmed and awestruck by its history. Brinkley wrote a somewhat similar volume in 1995, although his tenor has softened considerably in the intervening years. Agent, Peter Matson. (Nov. 4) Forecast: Brinkley died on the same day as Gregory Peck, robbing him of some of the attention his death otherwise might have received. This volume may provide a second opportunity to remember him. Knopf plans a 200,000-copy first printing. Copyright 2003 Reed Business Information.

Front row at the White House: my life and timesThomas, Helen, 1920-

This just in: what I couldn't tell you on TVSchieffer, Bob

Righteous indignation: excuse me while I save the worldBreitbart, Andrew

The woman at the Washington Zoo: writings on politics, family, and fateWilliams, Marjorie, 1958-2005

A man and his presidents: the political odyssey of William F. Buckley JrFelzenberg, Alvin S.

The prince of darkness: 50 years reporting in WashingtonNovak, Robert D.

What happened: inside the Bush White House and what's wrong with WashingtonMcClellan, Scott, 1968-

Rather outspoken: my life in the newsRather, Dan