No laughter here / by Rita Williams-Garcia. 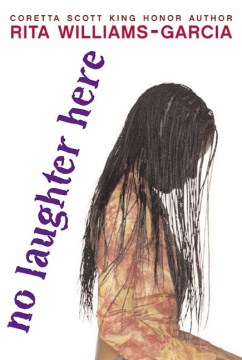 /*Starred Review*/ Gr. 4-8. Akilah can't wait to start fifth grade with her best friend, Victoria, who has been in Nigeria for the summer. But Victoria returns completely changed: withdrawn, physically unwell, and unable to laugh. A fifth-grade puberty film gives Victoria the words to tell Akilah what has happened to her: "I don't have what other girls have." Victoria has survived female circumcision, and Akilah is furious but sworn to secrecy, until her warm, supportive parents discover the truth and expose Victoria's family secret. Of the several recent novels about FGM (female genital mutilation), including Pat Collins' The Fattening Hut [BKL N 1 2003], for older readers, Williams-Garcia's story, written in Akilah's colloquial African American voice, is most successful. It combines a richly layered story with accurate, culturally specific information in language that's on-target for the audience, and the author tempers what could have been strident messages with interesting contrasts: Akilah's parents view FGM as an atrocity, even as they revere African culture; Akilah's aunt, who beats her children, raises questions about the forms of brutality ingrained in many families. Then there's Akilah herself, simultaneously confronted with her first menstrual period and the gravity of what has happened to her friend. Readers will have lots of questions for adults after reading this skillfully told, powerful story. ((Reviewed December 1, 2003)) Copyright 2003 Booklist Reviews

Akilah's best friend, Victoria, is spending the summer in Nigeria, where there will be a "special celebration to mark her coming-of-age." When Victoria returns home to Queens, something is wrong, and she finally tells Akilah what happened to her: a ritual clitoridectomy. Though Akilah is an engaging narrator, she sounds older than ten and several story elements strain credibility. But this will be an eye-opening book for most preteens. Copyright 2004 Horn Book Guide Reviews.

"Maybe becoming a lady in Nigeria is like becoming a lady here," muses ten-year-old Akilah. "Sit up straight, cross your legs, smile, and don't beat up boys in the park." If only that's all there was to it. Akilah's best friend and neighbor, Victoria, and her family are spending the summer in Nigeria, where there will be a "special celebration to mark her coming-of-age." When Victoria returns home to Queens, something is wrong: she walks differently, withdraws from her classmates, and barely speaks. After Victoria finally tells Akilah in confidence what happened to her--a ritual clitoridectomy--Akilah takes out her anger in a way that earns her a suspension from school. Akilah is an engaging, even funny (despite the book's title) narrator, if not always a convincing one: she sounds older than ten and telegraphs information that, one presumes, the author feels the reader needs to know. And several story elements strain credulity, including the way that Akilah and Victoria use (and don't use) e-mail and Instant Messaging, and, especially, the notion that Akilah's child-social-worker mother, who gave her own daughter a backyard African naming ceremony, doesn't guess sooner what happened to Victoria. But this will be an eye-opening book for most preteens: as Williams-Garcia writes in her author's note, "Although FGM is performed on young girls, materials written for young readers about this topic are scarce." As we leave Akilah and Victoria at novel's end, they are on the brink of clandestine, small-scale activism that one wants to think can change the world. Copyright 2004 Horn Book Magazine Reviews

In this disturbing and poignant coming-of-age novel, Williams-Garcia (Fast Talk on a Slow Track; Like Sisters on the Homefront) explores how two girls experience very different initiations into adolescence. Ten-year-old Akilah (whose name means "intelligence" in Swahili) feels ambivalent about being an "early bloomer." Instead of brooding about the changes in her body, she would rather be playing with her Nigerian friend Victoria, who is spending the summer in Africa with her family. Akilah looks forward to Victoria's return to America, but when Victoria finally does come home, she is different, acting quiet and withdrawn and treating Akilah like a stranger. Worst of all, Victoria "won't laugh." The author plants subtle clues as to Victoria's dramatic change (e.g., Victoria overreacts to the word "operation," in math class). But most readers will be as baffled as Akilah wondering what happened to Victoria in Nigeria to make her so sad. Then the shocking truth comes out during a heart-breaking confessional: While back in their homeland, Victoria's parents forced her to have an operation, and Victoria no longer feels whole. This contemporary tale about the ancient rite of female circumcision will no doubt leave an indelible mark on preteens. The author attempts to remain objective, showing how and why the ritual is still practiced in some cultures. Nonetheless, what readers will remember most about this honest novel is Victoria's physical and emotional pain and how her trauma dramatically affects Akilah's perception of Victoria's parents and her own pride in her heritage. Ages 12-up. (Jan.) Copyright 2003 Reed Business Information.

"This contemporary tale about the ancient rite of female circumcision will no doubt leave an indelible mark on preteens," PW said. "A disturbing and poignant coming-of-age novel." Ages 12-up. (Mar.) Copyright 2007 Reed Business Information.

I hadn't meant to tell you thisWoodson, Jacqueline

Darius the Great is not okayKhorram, Adib