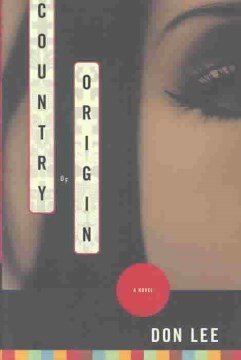 /*Starred Review*/ It's 1980, a hard-fought election year in which the Iranian hostage crisis plays an increasingly critical role. But that intrigue exists a world away from Foreign Service junior officer Tom Hurley, a cipher hiding a cowardly episode of treachery in his past. He's coasting through a dull-but-cushy appointment to the U.S. Embassy in Tokyo and targeting a CIA operative's wife for a bit of dangerous fun. She blipped onto Hurley's radar screen by asking him about the seemingly routine case of Lisa Countryman, a U.S. tourist who disappeared after ditching an under-the-table job at a fly-by-night English language school. The ensuing investigation takes Hurley and clueless police detective Kenzo Ota into Tokyo's seediest corners. It also forces both men to confront their many human failings, and possibly even overcome them. Issues of race, class, and national identity drive this clear-eyed story of closure, redemption, and carving out a place in the world. Lee expertly weaves a tiny new pleasure into every page, from fascinating forays into Japanese culture to wry lines in the vein of "People don't have affairs to get out of their marriages. They have them to prolong them." As satisfying as it is unsettling, this quiet literary triumph eschews plot pyrotechnics for fully realized, deeply felt characters who bumble and struggle their way toward grace much like the rest of us. ((Reviewed May 1, 2004)) Copyright 2004 Booklist Reviews.

Some mystery authors manage to create works of entertaining literary fiction, but fewer are successful at using the form to examine social themes. What makes Lee's (Yellow) work so satisfying is that while the mystery is used as a frame to support issues of race, exploitation, and identity, the narrative as a whole doesn't collapse under the weight of this literary ambition. The story takes place in Japan at the close of 1980 and is effectively told from the perspective of three characters: Lisa Countryman, a young American postgraduate of African American and Asian descent who goes missing after getting mixed up in the country's sex clubs; Tom Hurley, the junior officer at the U.S. consulate assigned to her case, who is of mixed Asian American heritage and as a matter of convenience tells acquaintances that he is Hawaiian; and lonely, beleaguered Japanese detective Kenzo Ota, who ultimately undertakes the effort to locate Lisa. The characters are victims of both perception and their own defense mechanisms, and their emotional responses are consistently convincing. Highly recommended for all fiction collections.-Edward Keane, Long Island Univ. Lib., Brooklyn, NY Copyright 2004 Reed Business Information.

A CIA agent gets in over his head when he investigates a young American woman's disappearance in 1980s Tokyo. This literary thriller from Ploughshares editor Lee is getting a big push, and our reviewer loved it (LJ 2/1/04). Copyright 2004 Reed Business Information.

Ploughshares editor Lee uses the racial homogeneity of Japan as a stark backdrop to this elegant first novel, a follow-up to his story collection, Yellow. Set in Tokyo in 1980, the book centers on the disappearance of Lisa Countryman, a half-Japanese, half-black Berkeley graduate student who goes to Japan to research the "sad, brutal reign of conformity" for her dissertation and, perhaps more importantly, embark on an identity quest. Her mixed-race background gives her an exotic beauty, and after a teaching job falls through, it lands her a job as a hostess girl at a Tokyo men's club. Echoes of Countryman's identity crisis ring through the lives of all the characters affected by her disappearance. When she vanishes, it is first brought to the attention of Tom Hurley, a vain and careless junior diplomat at the U.S. Embassy who tells people he's Hawaiian, though he's really half-Korean and half-white. The case is turned over to Kenzo Ota, a glum, divorced police inspector, who spent three hard years of his adolescence in Missouri. Convinced that Countryman's case could be just what he needs to put his career back on track, Ota resolves to find out what happened to her. The story of Countryman's time in Japan and her efforts to learn who she is unfolds parallel to Ota's efforts to learn her fate. Through the interlocking stories of Ota, Countryman and Hurley, Lee discourses on race, identity, the Japanese sex trade, social conventions and law. Sharply observed, at turns trenchantly funny and heartbreakingly sad, this novel could be the breakout book for Lee. Agent, Maria Massie, Witherspoon Associates. (July) Forecast: The novel's insights into the Japanese sex industry make it a grittier counterpoint to Memoirs of a Geisha, and its investigations of race and identity might, for some, recall White Teeth. Five-city author tour. Copyright 2004 Reed Business Information.