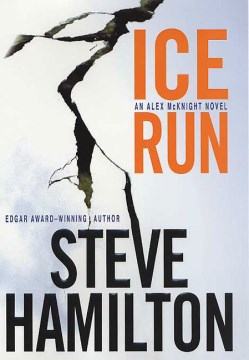 Murders from 30 years ago lead to present danger in Edgar and Anthony Award-winning Hamilton's latest snowbound mystery. Ex-almost-made-it baseball player and ex-big-city cop Alex McKnight returned to Paradise, Michigan, five mysteries ago, shattered by the death of his partner in a drug raid. McKnight has become something he never aspired to become, a caretaker of vacation cottages, a sometime private eye, and a full-time tender of his psychic wounds. Now he finds himself faced with an unfamiliar feeling, hope, thanks to his blooming romance with Ontario cop Natalie Reynaud. They schedule a romantic getaway in Sault Ste. Marie, but a threatening message left in their hotel room, consisting of photos of Natalie's deceased father and grandfather, forces the pair to confront the skeletons in the Reynaud family closet. The motivation for the action is a bit of a stretch here, but Hamilton still delivers powerful suspense and a socko climax. ((Reviewed May 1, 2004)) Copyright 2004 Booklist Reviews.

Private investigator Alex McKnight (Blood is the Sky) has no problem running into trouble. The death of an old man in the snow outside the hotel where Alex rendezvoused with his girlfriend, however, escalates into something much, much more. Before he knows it, Alex re-encounters the police chief, his one-time PI partner, and three thugs, who beat him senseless. And to top it off, the hard-won girlfriend leaves him. Meanwhile, Alex struggles with the bitter cold of Paradise, MI. Hamilton's evocative descriptions, memorable characters, and sympathetic hero recommend this to fans of literate crime fiction. Hamilton, an Edgar Award winner, lives in upstate New York. Copyright 2004 Reed Business Information.

This gripping, roller-coaster read, the sixth in Hamilton's Alex McKnight series, commences in the forlorn burg of Paradise, Mich., where ex-cop Alex ekes out a living renting cabins to snowmobilers from "down below." Alex's conspicuous consumption of salads and newly dyed hairdo alert his pub owner/protector that he's smitten with someone. But love isn't enough to shield Alex and Constable Natalie Reynaud, on leave from the Ontario Provincial Police, from the violent fallout of a Reynaud family secret. A merciless snowstorm threatens Alex's plans for a rendezvous with the traumatized Natalie, who witnessed the killing of her partner in Blood Is the Sky (2003), but they meet halfway at a charming hotel on the Canadian border. A cryptic note in an old Homburg hat left outside their room arouses Alex's curiosity. McKnight, with the aid of his former PI partner Leon Prudell, plumbs local Prohibition history to find the seed of enmity between two destructively intertwined clans. His efforts earn him a brutal beating, an incomprehensible breach with Natalie and the discovery of more than one untimely death. Hamilton expertly delivers sharply etched characters, a vivid setting and a thoroughly enjoyable hero, leaving us breathless, perched at the edge of our seats for this chilly ride. Agent, Jane Chelius. Author tour. (June 23)FYI: Hamilton has won Edgar, Anthony and Shamus awards. Copyright 2004 Reed Business Information.