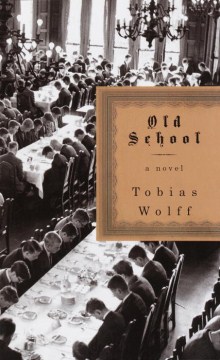 /*Starred Review*/ There are ways to lie without saying a word. It is 1960, and the narrator is beginning his final year at a private school of strong literary traditions. Aspiring writers edit the literary journal and compete to win private audiences with visiting luminaries of letters. This year, the guests are to be Robert Frost, Ayn Rand, and Ernest Hemingway. The narrator is a scholarship student, and though his school prides itself on class blindness, his classmates are well versed in spotting the subtle indicators of economic background. Longing to fit in, he dissembles, cultivating an "easy disregard" by which he hopes to imply his own privilege. But this doubleness leads him toward an unexpected decision with far-reaching consequences for his future. While a main theme here is a writer's growth, the work's essential component, the forming of character, gives it a universal appeal. As our storyteller grows through his identification with and understanding of important books, and learns the importance of writing honestly, he also learns that to insist too adamantly on the truth may require the individual to stand apart from even the group he loves. Wolff, acclaimed for his short stories and memoirs, has written a marvelous novel with resonance for old and young alike. His storytelling is economical, his prose is elegant, and his meditations are utterly timeless. Some readers may wish to turn from the last page to the first and begin again. ((Reviewed September 1, 2003)) Copyright 2003 Booklist Reviews

A young boy tries desperately to fit in at a fancy prep school. Hard to believe that this is a first novel from Wolff (This Boy's Life). With a 12-city author tour. Copyright 2003 Reed Business Information.

This first novel by Wolff (The Night in Question) falls into that odd subgenre: the prep-school coming-of-age story. On the surface, it is a plainly wrapped story of an anonymous narrator at an anonymous school in the 1950s who feels a writer's vocation but comes to an ethical crossroads. The school has regular writing competitions whose winners get to meet one of the great authors of the day, including Robert Frost and Ayn Rand (in a hilarious send up of objectivism). The lucky winner of the final contest will meet Ernest Hemingway, and so desperate is the narrator to triumph that he unwittingly falls into the dark waters of plagiarism. This story would be predictable if it did not shift so radically toward the conclusion. Ultimately, Wolff asks readers two probing questions: what is the nature of the narratives with which people represent themselves daily, and how do they run the danger of being undone by those stories if they are not careful? A big novel hidden in the structure of a small one, this work is highly recommended. [Previewed in Prepub Alert, LJ 7/03.]-David Hellman, San Francisco State Univ. Lib. Copyright 2003 Reed Business Information.

A scholarship boy at a New England prep school grapples with literary ambition and insecurity in this lucid, deceptively sedate novel, set in the early 1960s and narrated by the unnamed protagonist from the vantage point of adulthood. Each year, the school hosts a number of visiting writers, and the boys in the top form are allowed to compete for a private audience by composing a poem or story. The narrator judges the skills of his competitors, avidly exposing his classmates' weaknesses and calculating their potential ("I knew better than to write George off.... He could win.... Bill was a contender"). His own chances are hurt by his inability to be honest with himself and examine his ambivalent feelings about his Jewish roots. After failing to win audiences with Robert Frost and Ayn Rand, he is determined to be chosen by the last and best guest, legendary Ernest Hemingway. The anxiety of influence afflicts all the boys, but in crafting his final literary offering, the narrator discovers inspiration in imitation, finding his voice in someone else's. The novel's candid, retrospective narration ruefully depicts its protagonist's retreat further and further behind his public facade ("I'd been absorbed so far into my performance that nothing else came naturally"). Beneath its staid trappings, this is a sharply ironic novel, in which love of literature is counterbalanced by bitter disappointment (as one character bluntly puts it, "[Writing] just cuts you off and makes you selfish and doesn't really do any good"). Wolff, an acclaimed short story writer (The Night in Question, etc.) and author of the memoir This Boy's Life, here offers a delicate, pointed meditation on the treacherous charms of art. (Nov. 9) Forecast: This is Wolff's first full-length novel (and his first book in seven years) and as such will likely receive much critical attention. Fans of the author's short stories-regularly published in the New Yorker-should be pleased by his departure from form. Copyright 2003 Reed Business Information.

Gossip of the starlingsGramont, Nina de

A wonderful stroke of luckBeattie, Ann