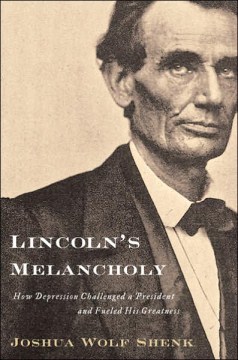 The spin on the sixteenth president continues. A recent book generated controversy by insisting Lincoln was gay, and now this one underscores the great president's depression. Shenk's study is, despite his stylistic tendency toward clinical stiffness, a responsible response to defining the enigmatic Lincoln's personality and, further, its effects not only on individuals but also on his performance as a wartime leader. Shenk's investigation of Lincoln's behavior (granted, with the disadvantage of time and distance) from his twenties to his death in the White House leads Shenk to discover strategies that Lincoln employed--in fact, invented for himself, in those pre-couch-and-consultation days--to combat his "melancholy," strategies that included, most notably, the telling of humorous stories. One of the most compelling aspects of Shenk's version of Lincoln's mental state is his indication that Lincoln's realization of a larger purpose in his life, his ambition for and sense of greatness, actually drew strength from his illness, a phenomenon called "melancholic success." An estimable contribution to the Lincoln literature. ((Reviewed August 2005)) Copyright 2005 Booklist Reviews.

Shenk argues that Lincoln's enduring melancholy-and the methods he used to cope with it-gave him the tools to lead a nation under duress. You'll see Shenk in a feature film on this subject, coming in the fall. Copyright 2005 Reed Business Information.

Lincoln's bouts with melancholy were well known in his day and became legendary after his death, but biographers, psychiatrists, and students of Lincoln have struggled to make sense of them. Was he mad, depressed, physically debilitated, or what? Over the years, historians have amplified or ignored Lincoln's mental state, but recent works of psychobiography and new medical findings on depression have opened the way for a fresh assessment. With uncommon common sense, a rare understanding of historical context, and a close reading of the primary sources, journalist Shenk persuasively argues that Lincoln indeed suffered from chronic depression. More important, he suggests that Lincoln's coping strategies not only helped him to live with his melancholy but prepared him for greatness. Lincoln's failures and his ability to live with countervailing tensions gave him the empathy, humility, and genius to win a terrible war and inspire others. While some readers might balk at Shenk's devotion to oral histories as the principal contemporary evidence on Lincoln's state of mind, they will find his discussions of Lincoln's private self and personal relationships revealing and instructive. Highly recommended for large public and university libraries. [See Prepub Alert, LJ 5/15/05.]-Randall M. Miller, Saint Joseph's Univ., Philadelphia Copyright 2005 Reed Business Information.

Abe the Emancipator, argues Washington Monthly contributor Shenk, struggled with persistent clinical depression. The first major bout came in his 20s, and the disease dogged him for the rest of his life. That Lincoln suffered from "melancholy" isn't new. Shenk's innovation is in saying, first, that this knowledge can be illuminated by today's understanding of depression and, second, that our understanding of depression can be illuminated by the knowledge that depression was actually a source of Lincoln's greatness. Lincoln's strategies for dealing with it are worth noting today: at least once, he took a popular pill known as the "blue mass"-essentially mercury-and also once purchased cocaine. Further, Lincoln's famed sense of humor, suggests Shenk, may have been compensatory, and he also took refuge in poetry. Unlike Americans today, Shenk notes, 19th-century voters and pundits were more forgiving of psychological and emotional complexity, and a certain prophetic pessimism, he notes, was appropriate to the era of the Civil War. Occasionally, Shenk chases down an odd rabbit trail-an opening meditation on whether Lincoln was gay, for example, is neither conclusive nor apposite. Still, this is sensitive history, with important implications for the present. (Sept. 20) Copyright 2005 Reed Business Information.