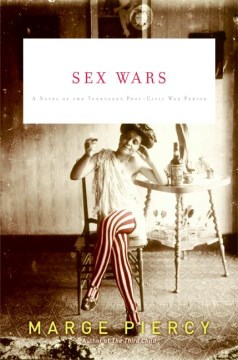 The title Sex Wars sounds like Star Wars, and although Piercy's latest is set on Earth, it does illuminate a strange and treacherous world: the Gilded Age in New York City. Piercy's great theme is always the battle between the sexes and the hardships misogyny imposes on women. In this mesmerizing, sexy, and forthright historical novel, she portrays heroic women determined to control every aspect of their lives, from birth control to finances. Piercy homes in on Cornelius Vanderbilt throwing his money and weight around as the first great wave of European immigrants arrives; savvy businesswomen make their fortunes running bordellos and performing abortions; the women's rights movement coalesces, and Anthony Comstock launches his fanatically censorious crusade. Piercy so vividly imagines the minds of the historical figures she fictionalizes that it is almost like visiting different planets to go from Comstock's neurotic psyche to the inner realm of the brilliantly scheming and sensual Victoria Woodhull, a beautiful medium who becomes the first woman stockbroker and a women's rights advocate. Piercy's portrayals of Elizabeth Cady Stanton and Susan B. Anthony are strikingly affectionate and funny, and the imaginary Freydeh Levin, a strong and giving Russian Jewish immigrant, is equally compelling as she goes into business manufacturing condoms. Triumphantly candid in its approach to sexuality, this is a message novel in the best possible sense, spectacularly engrossing and truly moving. ((Reviewed September 1, 2005)) Copyright 2005 Booklist Reviews.

Young, tough, and fresh off the boat, the Russian Jewish Freydeh works multiple jobs in post-Civil War New York, saving money so that she can bring over her entire family. But then she learns her sister is in the city. With cameos by Susan B. Anthony and the like. Copyright 2005 Reed Business Information.

In 1868, thousands of immigrants streamed into New York City in search of the American dream and instead found crushing poverty. Among this influx is recently widowed Freydeh, a Russian Jewish girl who must learn how to survive and finance her family's passage to the United States by herself. As an immigrant, Freydeh is barred from respectable trades and forced to juggle several abysmal jobs. While toiling away, she learns that one of her sisters is already in the city and seemingly lost. Woven into Freydeh's story of survival is the real-life fight for women's rights, with cameos by historical figures like Susan B. Anthony and Elizabeth Cady Stanton. Poet, novelist, and essayist Piercy (Gone to Soldiers ) deftly weaves both story lines into a novel that will please historical fiction fans. It coincides with the 85th anniversary of the passage of 19th Amendment, which granted women the right to vote, and this will likely boost interest. Recommended for all public libraries. [See Prepub Alert, LJ 8/05.]--Marika Zemke, West Bloomfield Twp. P.L., MI

This rich novel set in post-Civil War New York stars a true-life cast of characters that includes Victoria Woodhull, the spiritualist turned first woman to run for the U.S. presidency; passionate suffragette Elizabeth Cady Stanton; the aged Cornelius Vanderbilt, who sits atop a $100-million fortune as he tries to make contact with his dead son; and Anthony Comstock, a crusading moralist who dedicates his life to outlawing pornography and "obscene objects made of rubber." As they each vie for different kinds of sex-based power, the consequences of their actions echo from the halls of Congress to Manhattan's back alleys. Piercy (Gone to Soldiers ) powerfully dramatizes the early feminists' zeal and the high stakes of the gender wars it set in motion, and offers a wealth of period detail, including tips on using an outdoor latrine when living in a fifth-floor walk-up and the cost to bathe (fully dressed, no soap) in the East River. Most poignant among the invented characters is Freydeh Leibowitz, a young Russian-Jewish widow, who, far from the scandalous headlines and saloon gossip of the times, makes a living for herself and her adopted children, penny by penny, as a manufacturer of reliable condoms. Stylistically, the narration and dialogue don't wow, but the people, their ways of living and the ways they are marked by sex certainly do. (On sale Nov. 22)