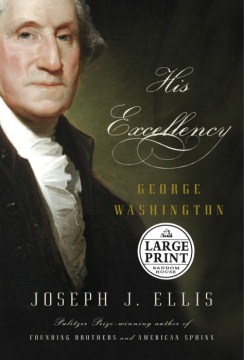 /*Starred Review*/ Ellis, author of the best-selling American Sphinx (1997), a National Book Award-winning biography of Thomas Jefferson, also wrote the best-selling and Pulitzer Prize-winning Founding Brothers (2000), an account of the Revolutionary generation. Now he takes on the daunting task of estimating the "Foundingest Father of them all." He conceived this "modest-sized book" as a trim distillation of the most current scholarship, resulting in "a fresh portrait focused tightly on Washington's character." No Washington-lite here, though; rather, this is Washington forthright. "First in war, first in peace"--commanding general of the American army in the Revolutionary War and first and precedent-setting president steering the new republic in the correct direction--are the two major aspects of Washington's public-service record and, naturally, the dual focus of Ellis' vibrant study. His concern is how Washington performed in each capacity and what his performance reveals about his general and abiding character traits. From Ellis' provocative conclusion that "a compelling case can be made that [Washington's] swift response to the smallpox epidemic and to a policy of inoculation was the most important strategic decision of his military career" to his assertion that slavery "linked the subject Washington cared about most, posterity's judgment, with the subject he had come to recognize as the central contradiction of the revolutionary era," the author is unafraid to see Washington anew, without trappings and free of idolatry. ((Reviewed September 15, 2004)) Copyright 2004 Booklist Reviews.

To the dismay of generations of historians, George Washington's personal papers offer little insight into his thinking and emotions. Using Washington's correspondence, reports of others, significant historical events, and his own creative insight, Ellis (Founding Brothers: The Revolutionary Generation) offers a unique, personal look at America's premier Founding Father, revealing a man with incredible energy, stamina, integrity, and vision as well as one who could be quite insecure, controlling, and shortsighted. Ellis examines the evolution of Washington's personality and challenges conventional scholarship (arguing, e.g., that his greatest military move was the inoculation of his troops against smallpox). He also determines that Washington's decisions on slavery were driven more by economics and posterity than purely by morality. Like Henry Wiencek's An Imperfect God, this well-researched and -written book is fresh but not revisionist and will appeal to both lay readers and scholars. Recommended for academic libraries and larger public libraries. [See Prepub Alert, LJ 6/1/04.] Robert Flatley, Kutztown Univ. Lib., PA Copyright 2004 Reed Business Information.

As big as Washington himself, this work by the prize-winning author of American Sphinx gets a whooping 500,000-copy first printing and a nine-city author tour. Copyright 2004 Reed Business Information.

In this follow-up to his bestselling Founding Brothers, Ellis offers a magisterial account of the life and times of George Washington, celebrating the heroic image of the president whom peers like Jefferson and Madison recognized as "their unquestioned superior" while acknowledging his all-too-human qualities. Ellis recreates the cultural and political context into which Washington strode to provide leadership to the incipient American republic. But more importantly, the letters and other documents Ellis draws on bring the aloof legend alive as a young soldier who sought to rise through the ranks of the British army during the French and Indian War, convinced he knew the wilderness terrain better than his commanding officers; as a Virginia plantation owner (thanks to his marriage) who watched over his accounts with a ruthless eye; as the commander of an outmatched rebel army who, after losing many of his major battles, still managed to catch the British in an indefensible position. Following Washington from the battlefield to the presidency, Ellis elegantly points out how he steered a group of bickering states toward national unity; Ellis also elaborates on Washington's complex stances on issues like slavery and expansion into Native American territory. The Washington who emerges from these pages is similar to the one portrayed in a biographical study by James MacGregor Burns and Susan Dunn published earlier this year, but Ellis's richer version leaves readers with a deeper sense of the man's humanity. 16 pages of photos not seen by PW. (Nov. 1) Forecast: The 500,000 first printing seems steep but could be justified by Ellis's record and the current popularity of the Founders. First serial to American Heritage magazine. Copyright 2004 Reed Business Information.

In the hurricane's eye: the genius of George Washington and the victory at YorktownPhilbrick, Nathaniel

Washington's revolution: the making of a leaderMiddlekauf, Robert