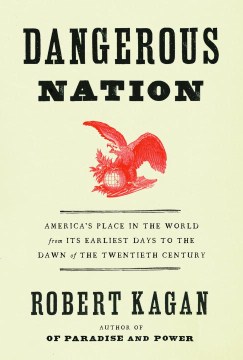 Kagan's last book, Of Paradise and Power (2003), caused a stir by arguing, with eloquence and historical rigor, that Americans are from Mars and Europeans are from Venus. His latest, the first of a two-volume treatise on the history of American foreign policy, is a forceful, sophisticated challenge to the idea that isolationism is America's heritage. From its first stirrings, Kagan argues, America has always been an expansionist power, fueled by desire for land and a perceived need to ensure internal stability by engaging itself abroad. Here, he celebrates the long nineteenth century, which saw America transformed from a vulnerable, spirited underdog to a muscular contender capable of taking down a major European power (Spain). The Civil War was a key turning point, the first expression of an ideological foreign policy aimed at regime change and reconstruction. Premised on a profound exuberance for America as a force of creative destruction--a geopolitical Shiva the Destroyer--and clearly intended to reinvigorate support for aggressive foreign policy in the twenty-first century, this book will surely prompt debate. Kagan's polished and assertive prose likewise resembles a force of nature, and will ensure broad readership. ((Reviewed November 1, 2006)) Copyright 2006 Booklist Reviews.

Though Americans pretend to be isolationist, argues Kagan (Of Paradise and Power), we've actually been grabbing land and power for four centuries. With a five-city tour. Copyright 2006 Reed Business Information.

This book is not for those for whom phrases like Manifest Destiny and â€œFifty-Four-Forty or Fight!â€ resurrect nightmares of American history class, a shame because they will miss out on an outstanding reading experience. Kagan (senior assoc., Carnegie Endowment for International Peace; Of Paradise and Power ) convincingly challenges the received wisdom that 19th-century America was essentially isolationist by showing that from its birth this nation aggressively expanded its frontiers across the entire continent, ousting the British, Spanish, French, Russians, and Mexicans from what are now the 50 states. Today, when America is widely scorned abroad, it is brow-furrowing to read of the same fears of America in the past. Then, it was our daring to be (in John Winthrop's words) a shining city on a hill that could disturb the authoritarian regimes of Old Europe. Plus a change . Massively researched, well argued, thought-provoking, and constantly surprising, this book should be purchased by all public libraries; its scholarly qualities also make it an essential addition to academic collections on American and diplomatic history.â€"Michael O. Eshleman, Kings Mills, OH

One of America's great myths, says Kagan, is that the U.S. has always been isolationist, only rarely flexing its muscles beyond its borders. Not so: in the first half of a two-volume study of American foreign policy, Washington Post columnist and bestselling author Kagan (Of Paradise and Power ) argues that even in the colonial era Americans restlessly pushed westward. At every turn, Kagan shows how a policy of aggressive expansion was inextricably linked with liberal democracy. Political leaders of the early republic developed expansionist policies in part because they worried that if they didn't respond to their clamoring constituentsâ€"farmers who wanted access to western land, for exampleâ€"the people might rebel or secede. Also provocative is Kagan's reading of the Civil War as America's "first experiment in ideological conquest" and nation building in conquered territory. He then follows American expansion through the 19th century, as the U.S. increased its dominance in the western hemisphere and sought, in President Garfield's phrase, to become "the arbiter" of the Pacific. Kagan may overstate the extent to which contemporary Americans imagine U.S. history to be thoroughly isolationist; it's a straw man that this powerfully persuasive, sophisticated book hardly needs. 75,000 first printing. (Oct. 12)

American creation: triumphs and tragedies at the founding of the republicEllis, Joseph J.

The rise of American democracy: Jefferson to LincolnWilentz, Sean

The Monroe Doctrine: empire and nation in nineteenth-century AmericaSexton, Jay, 1978-

Waking giant: America in the age of JacksonReynolds, David S., 1948-

First great triumph: how five Americans made their country a world powerZimmermann, Warren

Unruly Americans and the origins of the ConstitutionHolton, Woody