Chinese lessons : five classmates and the story of the new China / John Pomfret. 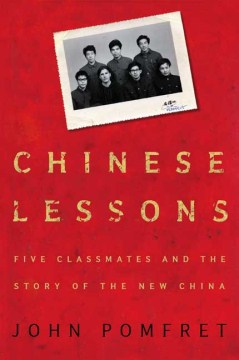 Tracing individual lives is a familiar way to make sense of history, and tracing the intersections of individuals is a familiar strategy for studying identity. Pomfret, a 1981 exchange student at Nanjing University and later an American journalist in China, does both in this coming-of-age story that reads like a novel, complete with conflict, intrigue, illicit sex, convincing villains, and sympathetic, flawed heroes, and drawing as much on Greek as Chinese notions of fate in the lives of individuals and states. Inverting Plato in typical American fashion, he looks at individuals--the small circle of friends whose lives first crossed at Nanjing University when China's "opening and reform" began--to understand the state in which they live. In so doing, he affords readers a glimpse of the intersection of two societies at a time when they were defining themselves as predominant world players. Regardless of whether what followed was guided by fate, Pomfret's narrative of it may prove helpful in realizing something other than collision between the U.S and China. ((Reviewed August 2006)) Copyright 2006 Booklist Reviews.

A prize-winning reporter from the Washington Post, Pomfret here recalls the year he spent at Nanjing University with students just recovering from the Great Leap Forward and the Cultural Revolution. Copyright 2006 Reed Business Information.

Pomfret (former Beijing bureau chief, Washington Post ) left Stanford University in the early 1980s to study Chinese in one of China's leading universities. He stayed in touch with his Chinese classmates as they came of age, and like Peter Hessler in Oracle Bones: A Journey Between China's Past and Present , he deploys their individual stories and his own coming of age and immersion in Chinese culture to tell the larger story almost as a memoir of a China itself coming of age. His writing is steady and frank, wittily rueful over China's follies and his own, appreciative, and wonderfully readable. His long-term commitment to China affords insights into the contradictions of economic boom, social uncertainties, and a political system that, yes, is changing but probably not fast enough. [See Prepub Alert, LJ 5/15/06.]

Pomfret's first sojourn in China came as an American exchange student at Nanjing University in 1981, near the outset of China's limited reopening to the West and its halting, chaotic and momentous conversion from Maoist totalitarianism to police state capitalism and status as world economic giant. Over the next two decades, he returned twice as a professional journalist and was an eyewitness to the events at Tiananmen Square in 1989. Pomfret's enthusiasm and personal access make this an engaging examination of three tumultuous decades, rooted in the stories of classmates whose remarkable grit and harrowing experiences neatly epitomize the sexual and cultural transformations, and the economic ups and downs, of China since the 1960s. At the same time, Pomfret draws on intimate conversations and personal diaries to paint idiosyncratic portraits with a vivid, literary flair. Viewing China's version of capitalism as an anomoly, and focused overwhelmingly within its national borders, the book's lack of a greater critical context will be limiting for some. But Pomfret's palpable and pithy first-hand depiction of the New China offers a swift, elucidating introduction to its awesome energies and troubling contradictions. (Aug.)

The man on Mao's right: from Harvard yard to Tiananmen Square, my life inside China's Foreign MinistryJi, Chaozhu, 1929-

The Party: the secret world of China's communist rulersMcGregor, Richard, 1958-

The courage to stand alone: letters from prison and other writingsWei, Jingsheng

Chasing the dragon: a veteran journalist's firsthand account of the 1949 Chinese RevolutionRowan, Roy

Prisoner of the state: the secret journal of Premier Zhao ZiyangZiyang, Zhao