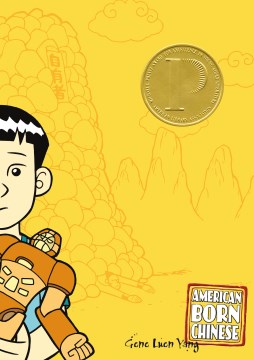 With vibrant colors and visual panache, indie writer-illustrator Yang (Rosary Comic Book) focuses on three characters in tales that touch on facets of Chinese American life. Jin is a boy faced with the casual racism of fellow students and the pressure of his crush on a Caucasian girl; the Monkey King, a character from Chinese folklore, has attained great power but feels he is being held back because of what the gods perceive as his lowly status; and Danny, a popular high-school student, suffers through an annual visit from his cousin Chin-Kee, a walking, talking compendium of exaggerated Chinese stereotypes. Each of the characters is flawed but familiar, and, in a clever postmodern twist, all share a deep, unforeseen connection. Yang helps the humor shine by using his art to exaggerate or contradict the words, creating a synthesis that marks an accomplished graphic storyteller. The stories have a simple, engaging sweep to them, but their weighty subjects--shame, racism, and friendship--receive thoughtful, powerful examination. ((Reviewed September 1, 2006)) Copyright 2006 Booklist Reviews

A National Book Award finalist and ALA's Printz Award winner, this fable stars the mythological Monkey King, realistic youngster Jin Wang of Taiwanese parentage, and TV sitcom teen Danny. All three are dogged by an unwanted identity and humiliated by others' prejudice. The Monkey King trains to be a god but is unceremoniously bounced out of heaven and urged by "he who is" (the great god) to be what he is: a monkey. Jin tries to be accepted and romance a fellow student but gets picked on by classmates. Danny does well with friends until Chinese cousin Chin-Kee, a bitingly funny bundle of racist stereotypes, makes his annual visit and behaves so offensively that Danny must change schools. Finally, the three stories suddenly merge, to center on Jin coming to terms with his minority experience and moving beyond his own fear and hostility. Coalescence comes almost too quickly, but the trivision approach and treatment are unique and moving. The art is simple, colorful, and both attractive and effective. Some potty humor; recommended for teen and adult collections.—M.C.

As alienated kids go, Jin Wang is fairly run-of-the-mill: he eats lunch by himself in a corner of the schoolyard, gets picked on by bullies and jocks and develops a sweat-inducing crush on a pretty classmate. And, oh, yes, his parents are from Taiwan. This much-anticipated, affecting story about growing up different is more than just the story of a Chinese-American childhood; it's a fable for every kid born into a body and a life they wished they could escape. The fable is filtered through some very specific cultural icons: the much-beloved Monkey King, a figure familiar to Chinese kids the world over, and a buck-toothed amalgamation of racist stereotypes named Chin-Kee. Jin's hopes and humiliations might be mirrored in Chin-Kee's destructive glee or the Monkey King's struggle to come to terms with himself, but each character's expressions and actions are always perfectly familiar. True to its origin as a Web comic, this story's clear, concise lines and expert coloring are deceptively simple yet expressive. Even when Yang slips in an occasional Chinese ideogram or myth, the sentiments he's depicting need no translation. Yang accomplishes the remarkable feat of practicing what he preaches with this book: accept who you are and you'll already have reached out to others. (Sept.)

What if it's usAlbertalli, Becky