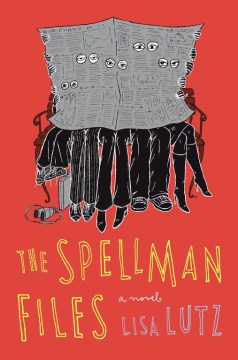 Fans of Janet Evanovich's Stephanie Plum series will enjoy this clever debut (the first in a series) featuring Izzy Spellman, an irrepressible 28-year-old sleuth who works for her parents' San Francisco PI firm. Members of the dysfunctional and relentlessly nosy Spellman clan include Izzy's 14-year-old sister, Rae, who engages in recreational surveillance (a fancy term for tailing people just for kicks), and her uncle Ray, a cancer survivor and recovering health-food addict who regularly disappears on liquor-drenched "Lost Weekends." Scenes showcasing the relationships among the various Spellmans are often laugh-out-loud funny. (The novel's prologue is an amusing example of the boundaries--or lack thereof--between Izzy and her mom and dad). Alas, bit after comic bit does not a mystery novel make, and only toward the end does Lutz pick up the narrative pace. Addicted to Get Smart reruns and forever attracted to the wrong kind of men, Izzy Spellman is definitely an appealing heroine; all this series needs to become a smashing success is a more generous dose of story and suspense. ((Reviewed January 1 & 15, 2007)) Copyright 2007 Booklist Reviews.

Isabel "Izzy" Spellman is a private detective whose story has a twist—the agency she works for is owned by her parents and is located in their home. Izzy's perfect brother, David, worked in the family business before becoming an attorney. Her uncle does contract work for them, and even kid sister Rae is a surveillance genius with a particular talent for picking locks and trailing people. Because of her family's quirkiness, Izzy tries to keep them apart from the new love of her life, Daniel Castillo, D.D.S. But the Spellmans' cheerful, idiosyncratic existence is shadowed by Rae's sudden disappearance. It's hard to believe that this extraordinarily clever book is a debut novel. Lutz showed her comic flair in her screenplay for the film Plan B , a 2001 "mob comedy" starring Diane Keaton, and it sparkles in this book as well. This first title in a new series about the eccentric Spellman family will be a welcome addition to mystery collections of all sizes, and sure to be enjoyed by fans of Janet Evanovich's Stephanie Plum and Meg Cabot's Heather Wells.—Shelley Mosley, Glendale Community Coll. Lib. Media Ctr., AZ

Cracking the case can get complicated and outrageously wacky when a family of detectives is involved, but Lutz has a blast doing it in her delicious debut. Isabel "Izzy" Spellman, a San Francisco PI who began working for Spellman Investigations at age 12, could easily pass as Buffy or Veronica Mars's wiser but funnier older sister. Izzy digs TV, too, especially Get Smart (an ex-boyfriend's ownership of the complete bootlegged DVD set is his major selling point). Now 28, Izzy thinks she wants out, but elects to take on a cold case while dealing with 14-year-old sister Rae, a nightmarish Nancy Drew, and parents who have no qualms about bugging their children's bedrooms. At times the dialogue-heavy text reads like a script and the action flags, but these are quibbles. When Rae suddenly disappears, Izzy and her family must learn some serious lessons in order to find her. Can the family that snoops together stay together? Stay tuned as a dynamic new series unfolds. 150,000 first printing. (Mar.)

One for the moneyEvanovich, Janet