In spite of the gods : the strange rise of modern India / by Edward Luce. 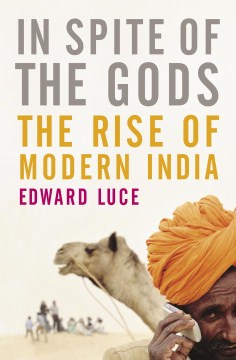 Reporting from India in recent years for the British newspaper Financial Times, Luce distills from his experiences this assessment of the country's social, economic, and international situation. Against the theme of India's anticipated ascent into the top tier of world powers, Luce sorts through facts of life that both promote and hinder that future, namely, its booming economy and the deep destitution of most of its people. Built on interviews with people from the top of politics and business to those from society's bottom rungs, Luce's presentation covers the breadth of India's billion-plus populace and its experience of economic improvement. Progress is spotty, however, and in addition to widespread poverty, it is hampered by pervasive corruption. As for caste and ethnic communalism, Luce's observations encompass both their continuing influence as social identifiers and their erosion under the forces of consumerism and relative upward mobility. Luce will accessibly acquaint readers interested in India with the country's salient contemporary aspects, from Bollywood to nuclear weapons. ((Reviewed January 1 & 15, 2007)) Copyright 2007 Booklist Reviews.

Here is an introspective study of the realities of modern India, the world's largest democracy and a country arguably poised to rival China and America as a global player. Assessing its social welfare programs, communalism, local and national politics, and place in today's globalization, Luce (Washington bureau chief, former South Asia bureau chief, Financial Times ) commends India's progress in relation to other developed nations and throws light on areas where further progress is crucial, especially the need to bring the masses out of poverty. Although Luce is not native to India, he has produced an unbiased presentation, quoting people from all walks of life, from politicians, historians, and bureaucrats to those who are the victims of poverty or political bias. He thoroughly examines the varieties of corruption endemic from the grass roots up and points out the contradictions of a country that can boast of its nuclear strides while failing to invest in care for its urban and rural poor. Luce has produced a book as diversely focused as India itself. It will serve both general readers and specialists in international relations and the politics of India. Strongly recommended for academic libraries and large public libraries; college libraries and beginning politicians and bureaucrats in India would profit from it as well.â€"Uma Doraiswamy, Western Kentucky Univ. Lib., Bowling Green

A burgeoning economic and geopolitical giant, India has the 21st century stamped on it more visibly than any other nation after China and the U.S. It's been an expanding force since at least 1991, explains journalist Luce, when India let go of much of the protectionist apparatus devised under Nehru after independence in 1947 from Britain, as part of a philosophy of swadeshi (or self-reliance) that's still relevant in India's multiparty democracy. From his vantage as the (now former) Financial Times 's South Asia bureau chief, Luce illuminates the drastically lopsided features of a nuclear power still burdened by mass poverty and illiteracy, which he links in part to government control of the economy, an overwhelmingly rural landscape, and deep-seated institutional corruption. While describing religion's complex role in Indian society, Luce emphasizes an extremely heterogeneous country with a growing consumerist culture, a geographically uneven labor force and an enduring caste system. This lively account includes a sharp assessment of U.S. promotion of India as a countervailing force to China in a three-power "triangular dance," and generally sets a high standard for breadth, clarity and discernment in wrestling with the global implications of New India. (Jan.)

Imagining India: the idea of a nation renewedNilekani, Nandan

The elephant, the tiger, and the cell phone: reflections on India, the emerging 21st-century powerTharoor, Shashi, 1956-

The elephant and the dragon: the rise of India and China and what it means for all of usMeredith, Robyn

Age of ambition: chasing fortune, truth, and faith in the new ChinaOsnos, Evan, 1976-

Planet India: how the fastest-growing democracy is transforming America and the worldKamdar, Mira