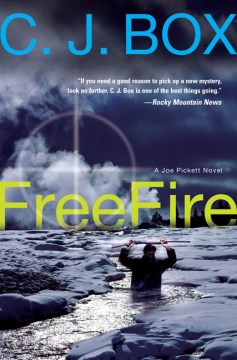 /*Starred Review*/ Box set the standards so high with his Joe Pickett series that, once in a while, he's had a hard time getting over the bar himself, as with In Plain Sight (2006), where he just tripped it with his toe. In ree Fire, however, he gets over cleanly. Pickett, having been fired as a game warden, is working as foreman of his father-in-law's ranch when Wyoming's loose-cannon governor, Spencer Rulon, reinstates him--not to work his old district but to investigate, without official support, a crime in Yellowstone National Park. A lawyer has found a legal loophole that allows him to kill four campers and walk away scot-free, enraging Rulon. (A remote, uninhabited part of the park, soon dubbed the "Zone of Death," has murky jurisdiction and no residents to form a jury.) But, sure as Pickett is hard on government vehicles, there's something even more sinister than a twisted legal mind behind the murders. Box is a master at working New West issues into his stories--here it's something called biomining--exploring pro and con arguments without missing a storytelling beat. And, mining series gold, he's forged a perfect alloy of familiar and fresh. Though Joe's far out in no-man's-land, as professionally on his own as he's ever been, the family man's moral compass is as strong as ever. And setting the action in the bubbling Yellowstone caldera--which could blow sky high any minute, we're told--is a masterstroke, lending both urgency and the long view to the proceedings. Once again, recommended for practically everybody. ((Reviewed January 1 & 15, 2007)) Copyright 2007 Booklist Reviews.

Although recently fired from his job as a Wyoming game warden, Joe Pickett (In Plain Sight ) is asked by the governor to investigate an officially closed multiple murder case in Yellowstone National Park. Four campers were gunned down by a lawyer who escaped conviction via a loophole. Knowing full well that federal agents and the National Park Service will not want him poking around, Joe stirs up trouble nonetheless with Nate Romanowski, still wanted by the FBI for questioning in a number of unrelated crimes. Their surprise discoveries in Yellowstone quickly escalate into a dangerous situation. Box, winner of the Anthony, Macavity, Gumshoe, and Barry Mystery awards, knows how to turn on the nail-biting suspense and violence until the cliff-hanger of an ending. Fans of outdoor action mysteries by such authors as Steve Hamilton and William Kent Krueger will snap this up. Highly recommended. Box lives outside Cheyenne, WY. [See Prepub Mystery, LJ 1/07.]

When four environmental activists employed by Yellowstone Park are murdered in an isolated area, the Wyoming governor sends outspoken Joe Pickett, fired in his last outing, In Plain Sight (2006), from the state's game and fish department, to investigate in Anthony-winner Box's absorbing seventh crime novel, his best yet. Helped by astute park ranger Judy Demming and his antisocial pal, falconer Nate Romanowski, Joe gradually connects the murders to competition for bio-mining rights in Yellowstone's hot springs. Joe's often harassed family is on the sidelines, except for a startling appearance by his long-estranged father. Box skillfully weaves ominous scientific phenomena and legal loopholes peculiar to Yellowstone into his story of corruption, greed and deception. The author vividly evokes Yellowstone's natural beauty, but the book's real power emanates from Pickett's (and Box's) passion for preserving the wilderness and stopping those who would cynically destroy it. (May)