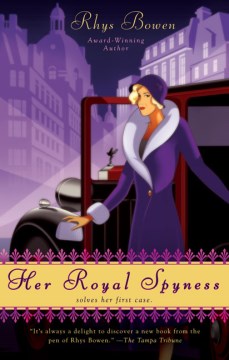 /*Starred Review*/ Bowen, the Agatha winner responsible for the popular Molly Murphy series, has come up with another winner in her new heroine, Lady Georgina, the least important member of the royal family. Thirty-fourth in the line of succession, Georgie may have the title but none of the money. What's a girl to do? Well, in Georgie's case, she tries opening her own domestic agency, with herself as the only domestic. Even her brother, Binky, the duke, is barely holding on to the family castle in Scotland, and that hold becomes tenuous when a French rogue claims to have proof that Binky and Georgie's father gambled the homestead away before his suicide. So, when the Frenchie winds up drowned in the bathroom of Binky's Belgrave house, there's reason to worry. After Binky's arrest, Georgie feels it's up to her to find the real murderer, but soon she finds her own life threatened, repeatedly. The mystery jigs and jags, but the best part here is Bowen's evocation of 1930s England. Drawing on Georgie's diary entries, she vividly portrays what daily life between the wars was like for a modern young woman bumping up against tradition. Populated with lots of neatly delineated characters, including Mrs. Simpson and a sexy Irish lord attempting to help Georgie lose her burdensome virginity, this is a smashing romp. ((Reviewed May 1, 2007)) Copyright 2007 Booklist Reviews.

Bowen, author of the successful "Molly Murphy" and "Constable Evans" series, turns her attention to 1930s London and Lady Georgiana, great-granddaughter of Queen Victoria and 34th in line to the English throne. Despite their high-class breeding, the Rannoch family is quite broke, and Georgie must make ends meet in London with no money and no staff to take care of her needs. Then someone murders the odious Frenchman who had planned to seize the Rannochs' Scottish estate. Because Lady Georgiana asks questions to save her brother, who is the prime suspect, the killer's attention turns to her. Delightfully nave, charming, and quite smart, Georgie is a breath of fresh air. Don't miss this delightful cozy series launch. Bowen lives in Northern California. [See Prepub Mystery, LJ 3/1/07.]

Set in London in 1930, this merry first in a new cozy series from Agatha-winner Bowen introduces a delightful heroine—Lady Victoria Georgiana Charlotte Eugenie. Thirty-fourth in line for the English throne, Georgie has been educated to curtsey, host lavish fetes and marry well. When her brother cuts off her pitiful allowance, Georgie leaves the family home in Scotland for London, determined to become a liberated woman. Lasting only a few hours as a saleswoman in Harrods, Georgie starts a maid service, but she turns detective after finding a drowned man in her bathtub. When her brother is accused of the murder, she must try to clear him and the family name. Quirky characters like her lovable grandfather; her estranged, oft-wed mother; and an incorrigible, sexy Irishman add to the fun. Georgie's madcap antics are certain to leave the reader eager for the next installment. Bowen is also the author of the Molly Murphy (In Dublin's Fair City , etc.) and the Constable Evans (Evanly Bodies , etc.) series. (July)

A brush with death: a Susie Mahl mysteryCarter, Ali

The other lady vanishesQuick, Amanda