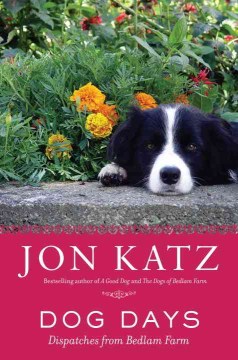 "Trying to assemble a sort-of-heavenly city in West Hebron is not a casual thing." So Katz begins his latest collection of stories from upstate New York's Bedlam Farm, the saga of which began with A Dog Year (2002). Bedlam Farm, a cross between a working and a hobby farm, is the home of the animals that are his inspiration. Jeanette the donkey, who everyone thought was overweight, presented Katz with a surprise foal. A local dairy farmer was embarrassed to admit that he couldn't send one of his Brown Swiss steers to market because he followed him around like a dog, and he persuaded Katz to take him, whereupon he was renamed Elvis. And the dogs: workaholic Rose, the border collie, who can be relied on in all instances for all kinds of work; the new border collie, Izzy, who comes from a troubled past; and the Labradors Clem, who loves everyone but needs one special person, and gentle Pearl, who knows instinctively what everyone needs. A must-read for all animal lovers. ((Reviewed April 15, 2007)) Copyright 2007 Booklist Reviews.

Continuing the saga of his metamorphosis from sophisticated suburbanite to rural farmer (see the previous entries A Dog Year, The Dogs of Bedlam Farm , and A Good Dog ), Katz follows up with this delightful memoir. Bedlam's farm population has grown and changed: an old dog is gone, a neurotic but innately talented border collie joins the family, a gentle Labrador is rehomed, two cows arrive, a newly purchased donkey gives birth unexpectedly, and a shy ram is retired and replaced by a good breeder. Katz explores his evolving attitudes toward animals: livestock versus pets, numbers versus names, those for whom the vet bill cannot exceed the selling price and those for whom almost no vet bill is too high. He honestly and humbly confesses what he has learned from these animals and the local people who have become a part of his life and have shaped his emerging self. A vivid picture of a 60-year-old man attempting to live the rugged rural life emerges. This beautiful tale, poetically told, is recommended for public libraries and James Herriot fans. [See Prepub Alert, LJ 3/1/07.]—Florence Scarinci, Nassau Community Coll. Lib., Garden City, NY

Not only has Katz written 16 books, he cohosts Dog Talk on public radio, freelances for a variety of newspapers and magazines, and operates the eponymous Bedlam Farm in upstate New York—sometimes with his wife, but always with dogs and chickens and sheep and even a few donkeys and cows. Readers familiar only with Katz's suburban mystery novels will find that his farm memoirs set out to do basically the same thing, bring order to chaos. His goal in running Bedlam Farm is to find ways for his various animals and their humans to work together in harmonious synchronicity. Everything requires balance. He must be mindful of his own tendency to anthropomorphize, while remaining open to the emotional bonds his animals invite. He must remember that many awful things—flies, freezing weather, disease—are normal in the lives of animals, even as he struggles to give his animals the best life possible. He has to balance his focus on the farm with his relationship with his wife, who never particularly approved of the farm idea, even if she supported his need to do it. Anyone who loves animals or country life, but maybe can't have a pet or actually live in the country, will find Katz a perfect armchair companion. (June)

Oogy: the dog only a family could loveLevin, Larry (Laurence M.)

Chicken soup for the soul: what I learned from the dog : 101 stories of canine life, love and lessonsCanfield, Jack, 1944-

The dogs who found me: what I've learned from pets who were left behindFoster, Ken
Esther the Wonder Pig: Changing the World One Heart at a TimeJenkins, Steve

Ask the animals: a vet's-eye view of pets and the people they loveCoston, Bruce R.

The secret life of cowsYoung, Rosamund