The Chicago way / by Michael Harvey. 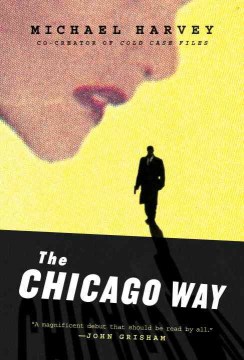 The opening pages are packed with the kind of wry, dry narration that goes down as smoothly as a pulp paperback with a shot of rye. But the case that walks in through Chicago PI Michael Kelly's door is no laughing matter: find a brutal rapist who walked out of jail nine years ago. Harvey is a cocreator of A&E's Cold Case Files, and his plot reflects a true-crime sensibility. As Kelly's investigation uncovers a growing body count, DNA evidence, antirape activists, and a John Wayne Gacy–like serial killer all come into play. But as much as we enjoy a mix of vintage prose and contemporary settings, wisecracking banter is the wrong tone for a topic like rape. The prose sobers up somewhat as the tale goes on, but Harvey never gets the blend quite right. It's a twisty page-turner (and Chicagoans will enjoy seeing the Lincoln Park and Wrigleyville neighborhoods cast as mean streets), but if Harvey had chosen either a lighter plot or darker prose, the book could have been much better. Copyright 2007 Booklist Reviews.

Chicago P.I. Michael Kelly is asked by a former partner to look into a cold case-which is hardly surprising since the author is cocreator and executive producer of TV's Cold Case Files. Of course, the partner ends up dead. With an eight-city tour. Copyright 2007 Reed Business Information.

The latest incarnation of Raymond Chandler's Philip Marlowe is ex-Chicago cop Michael Kelly, who narrates his tale in crisp staccato prose. Kelly is drawn into an eight-year-old rape case after his former partner is found dead on Navy Pier. The rape victim becomes Kelly's latest client, a woman whose story intrigues a DNA analyst and a TV anchorwoman. Kelly's investigation soon takes him into deep, dangerous waters, with connections to the mob, a cover-up, and a serial killer. Debut author Harvey borrows elements from Chandler and Robert B. Parker's Spenser to create an appealing, crusading sleuth. Despite a certain lack of originality in the serial killer, who resembles notorious murderer John Wayne Gacy, this is recommended for all public libraries. Harvey is the cocreator of television's Cold Case Files , and that may add patron appeal.—Lesa M. Holstine, Glendale P.L., AZ

Harvey's debut delivers a fast-paced thrill ride through Chicago's seedy underbelly, where the lines between cops and criminals become dangerously blurred. When his old partner asks for help with an old rape case, Michael Kelly, former Chicago detective turned PI, finds himself in the middle of a massive coverup with links to a notorious serial killer on death row. With the help of his childhood friend, DNA analyst Nicole Andrews, feisty and sexy TV reporter Diane Lindsay and a handful of cops he hopes he can trust, Kelly must solve the original rape case while staying alive as the men who killed to keep a secret set their sights on him. Harvey, the cocreator and executive producer of A&E's Cold Case Files , spins a twisted story that masterfully combines the sardonic wit of Chandler with the gritty violence of Lehane's Kenzie and Gennaro series. Bringing Chicago to life so skillfully that the reader can almost hear the El train in the distance, Harvey is poised to take the crime-writing world by storm. (Aug.)

City of the sunLevien, David

A drink before the warLehane, Dennis