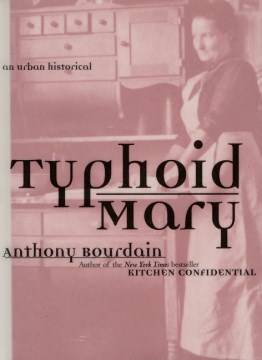 In Typhoid Mary , Bourdain, renowned chef and author of Kitchen Confidential (2000), reexamines the legend of Mary Maflon, otherwise known as the infamous Typhoid Mary. Unwittingly responsible for an outbreak of typhoid fever in Oyster Bay, Long Island, in 1904, Mary, a cook, fled when authorities began to suspect that she was a carrier. Resurfacing in New York City, she continued to infect victims with the typhoid bacillus until she was caught and incarcerated by the authorities. Investing a tragic tale with a new twist, Bourdain plays historical detective, providing an entertaining and suspenseful evocation of turn-of-the-century New York. ((Reviewed April 15, 2001)) Copyright 2001 Booklist Reviews

Bloomsbury launches its "Urban Historicals" series with a pair of books on both New York's most infamous cook and what (if true) would have been the city's greatest hoax. Bourdain, the chef and author of last year's cheeky Kitchen Confidential, attempts to retell the story of Mary Mallon from a cook's perspective. Early in the last century, the Irish immigrant Mallon became notorious as "Typhoid Mary" and was imprisoned by health authorities on an island in the East River after (unwittingly or not) spreading typhoid to 33 victims, with three confirmed deaths. Like Lizzie Borden, Mallon has received various writers' interpretations, the last in a 1996 biography by Judith Leavitt of the same title (LJ 5/15/96) that told the tale with more health science and a less cranky style. Bourdain chooses to light the story's shadows by relating to her as a once-proud, broken-down cook, interpreting Mallon's infecting spree with a kitchen-hardened aplomb and New York attitude. Chapter titles tend toward the snarky and hip ("There's Something About Mary," "Typhoid sucks"), and only a New York guy would describe bacteria settling into a gall bladder "like rent-controlled pensioners." Yet when, at the work's end, Bourdain makes a cook-to-cook offering at Mary's grave, it somehow feels more moving than stagey. Rose, a novelist and founder of the 1980s literary magazine Between C&D, has created "an entertainment, a reimagining of a piece of the past that may well have been imagined in the first place." His light-handed telling concerns a possible hoax from about 1824, when a butcher and a carpenter in New York's old Centre Market purportedly discussed their plan to solve overbuilt Manhattan's dangerous bottom-heaviness by sawing it in half, turning the top part of the island around, and reattaching it at the Battery. Word spread, and the enormous project seized the imaginations of Manhattan's poor, who showed up by the hundreds with saws and shovels, while merchants set aside enormous stores of food for the expected work crews. So, at least, claimed one of the hoaxers years later in a conversation with his amateur-historian nephew. Instead of being the "Crop Circles" phenomenon of its day, however, there seems no reason to believe the sawing scam was put over on anyone beyond the credulous nephew who first recorded it; Rose is quite aware of this and puts this re-embroidered lore into entertaining context, along the way creating a charming, atmospheric portrait of old New York. He also notes some classic period cons (the 161-year-old slave who nursed George Washington; the embalmed mermaid) perpetrated by the era's proven master humbuggers. Nathan Ward, "Library Journal" Copyright 2001 Cahners Business Information.

The ghost map: the story of London's deadliest epidemic-- and how it changed the way we think about disease, cities, science, and the modern worldJohnson, Steven, 1968-

The great influenza: the epic story of the deadliest plague in historyBarry, John M., 1947-

Scourge: the once and future threat of smallpoxTucker, Jonathan B.

The pandemic century: one hundred years of panic, hysteria, and hubrisHonigsbaum, Mark

Black Death at the Golden Gate: the race to save America from the bubonic plagueRandall, David K.

Flu: the story of the great influenza pandemic of 1918 and the search for the virus that caused itKolata, Gina Bari, 1948-

On immunity: an inoculationBiss, Eula

Inside the outbreaks: the elite medical detectives of the epidemic intelligence servicePendergrast, Mark