Richistan : a journey through the American wealth boom and the lives of the new rich / Robert Frank. 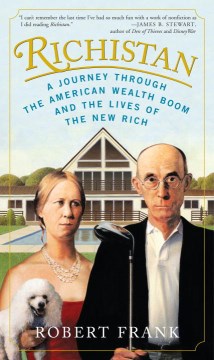 Frank, a Wall Street Journal columnist, observes the unprecedented rise of wealth in the U.S., which has essentially created a new country, here dubbed Richistan, with a net worth of $1–$10 million in over 7 million households, $10–$100 million in over 1.4 million households, and $100 million to $1 billion in thousands of households, plus more than 400 billionaires. Stemming from the rise of financial markets, new technology, and a freer flow of goods and information, this river of money courses around the world, seeking investments not only in stocks but in hedge funds, private-equity funds, and venture capital. Conducting extensive interviews, the author tells stories of these wealthy individuals, neither deifying nor denigrating them. With emphasis placed here on the increasing gap between the wealthy, middle class, and poor, we also learn about the challenges to society of this great disparity, the responsibility that this abundant wealth carries, and Frank's hope that some of this enormous pool of money will be used to solve widespread social problems. Excellent book.

Wall Street Journal senior special writer Frank got the idea for this book when he stumbled across the statistic that the number of U.S. millionaire households has doubled since 1995. His research took a scenic turn when he made it his full-time focus to study the lifestyles of the rich and richer. These well-heeled folks make their homes in Richistan, a metaphorical land of nine million souls, inhabited by the nouveaux riches (a term Frank implies without using) who have made—not inherited—their fortunes. Their politics and lifestyles vary by their socioeconomic stratum within Richistan. Upper Richistan is where things begin to get interesting: on these lavish estates, each household is worth more than $100 million and spends an average of $182,000 on wristwatches each year. And we haven't even visited the hamlet of Billionaireville yet. Overall, the author argues, the concentrated wealth of Richistan is great for the economy—and for the veritable army of workers hired to manage the complicated lives of some very conspicuous consumers. Cruising around in private jets and yachts, Richistanis size up one another's assets and invite one another to their charity balls. Frank's private tour of the very real inhabitants of the comical, magical land of Richistan will be popular in public library business collections. [See Prepub Alert, LJ 12/06.]—Carol J. Elsen, Univ. of Wisconsin, Whitewater

W hen Frank, a columnist for the Wall Street Journal , began noticing that the ranks of America's wealthy had more than doubled in the last decade, and that they were beginning to cluster together in enclaves, he decided to investigate this new society, where "$1 million barely gets you in the door." The "Richistanis" like to consider themselves ordinary people who just happen to have tons of money, but they live in a world where people buy boats just to carry their cars and helicopters behind their primary yachts, and ordering an alligator-skin toilet seat won't make even your interior designer blink. But Frank doesn't just focus on conspicuous consumption. He talks to philanthropists who apply investment principles to their charitable contributions and political fund-raisers who have used their millions to transform the Colorado state legislature. He also meets people for whom sudden wealth is an emotional burden, whose investment club meetings can feel like group therapy sessions. It's only in the final pages that Frank contemplates the widening gap between Richistan and the rest of the world—for the most part, his grand tour approach never loses its light touch. (June)

Plutocrats: the rise of the new global super-rich and the fall of everyone elseFreeland, Chrystia, 1968-

Requiem for the American dream: the 10 principles of concentrated wealth and powerChomsky, Noam

Capital in the twenty-first centuryPiketty, Thomas, 1971-

The complacent class: the self-defeating quest for the American dreamCowen, Tyler

The middle-class millionaire: how the new rich are transforming AmericaPrince, Russ Alan, 1958-