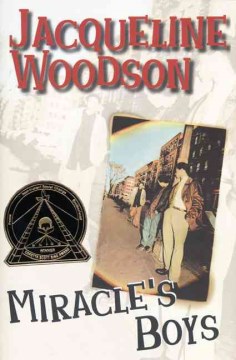 Gr. 6^-10. Lafayette, 12, tells his family story in a voice that's funny, smart, and troubled. It's a story of poverty and grief, of family secrets and brotherly love. Lafayette's oldest brother, Ty'ree, has given up hope of college so that he can work and raise Lafayette and their middle brother, Charlie, who robbed a local candy store two years ago and has returned home from the correctional facility an angry stranger. Charlie is now in trouble again; this time it's a gang fight. With the boys always is the absence of their beloved mother and the guilt, blame, and sorrow they all feel and incite in one another. Mama is too saintly a figure, at least in her three sons' soft-glowing sorrowful memories, but the fast-paced narrative is physically immediate, and the dialogue is alive with anger and heartbreak, "brother to brother to brother." As in Walter Dean Myers' novel 145th Street , the city block in the story is hard and dangerous--and it is home. ((Reviewed February 15, 2000)) Copyright 2000 Booklist Reviews

This compelling novel about three African-American brothers is oddly reminiscent of S. E. Hinton's early novels, with its streetwise, self-sufficient orphans. Although there is little action in a story that is told almost entirely through dialogue and thirteen-year-old Lafayette's thoughts and memories, the narrator's voice maintains a tone of sweet melancholy that is likely to hold the attention of thoughtful young teens. Copyright 2000 Horn Book Guide Reviews

Even though it's been more than two years since his mother died, thirteen-year-old Lafayette continues to grieve by withdrawing into an inner world where he is haunted by his memories. Secretly he blames himself for his mother's death since he was the one to find her body after she sank into a diabetic coma. His twenty-two-year-old brother Ty'ree, mature and responsible, has some demons of his own: he witnessed the drowning death of their father before Lafayette was even born. These two brothers have learned to depend on each other for the emotional comfort that comes from predictable daily routines. Quite likely each would have worked through his private trauma at his own pace were it not for a third brother, Charlie, who, at age sixteen, has just returned from doing time at Rahway Home for Boys for an armed robbery he committed three years earlier. The challenge of living with this angry, hostile brother forces Ty'ree and Lafayette to open up to each other, so that they can finally work through their grief and figure out how to help Charlie survive. This compelling novel about contemporary African-American brothers living in New York City is oddly reminiscent of S. E. Hinton's early novels, with its streetwise, self-sufficient orphans who seek refuge in art films and self-examination. Although there is little action in a story that is told almost entirely through dialogue and Lafayette's innermost thoughts and memories, the narrator's voice maintains a tone of sweet melancholy that is likely to hold the attention of thoughtful young teens. And, like Hinton's novels, it may not be entirely credible, but it sure has heart. k.t.h. Copyright 2000 Horn Book Magazine Reviews.

Once again, Woodson (If You Come Softly; From the Notebooks of Melanin Sun) reveals a keen understanding of the adolescent psyche via the narration of a winning seventh-grader. Lafayette, whose mother has recently died, is worried that some day he will be separated from his two older brothers: high-school-graduate Ty'ree, who gave up a scholarship to MIT to take care of his younger siblings; and Charlie, the rebellious middle boy, who, after spending more than two years in a correctional facility, has returned home cold and tough. (Lafayette calls him "Newcharlie," because his brother, with whom he was once so close, now seems unrecognizable to him.) Viewing household tensions and hardships through Lafayette's eyes, readers will come to realize each character's internal conflicts and recognize their desperate need to cling together as a family. The boys' loyalties to one another are tested during a cathartic climax, though it is resolved a bit too easily, and Lafayette's visions of his mother aren't fully developed or integrated into the plot. Gang violence and urban poverty play an integral part in this novel, but what readers will remember most is the brothers' deep-rooted affection for one another. An intelligently wrought, thought-provoking story. Ages 10-up. (Apr.) Copyright 2000 Cahners Business Information.

Seventh-grader Lafayette fears that he will become separated from his two brothers after the death of their mother. "Viewing household tensions through Lafayette's eyes, readers will come to realize each character's internal conflicts and recognize their desperate need to cling together as a family," said PW. Ages 12-up. (Dec.) n Copyright 2001 Cahners Business Information.

Darius the Great is not okayKhorram, Adib

The porcupine of truthKonigsberg, Bill

The inexplicable logic of my lifeSaenz, Benjamin Alire