Listening is an act of love : a celebration of American lives from the StoryCorps Project / edited and with an introduction by Dave Isay. 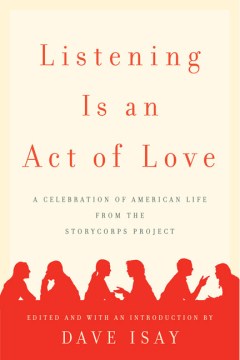 There's something about the sanctuary of a StoryCorps recording booth—whether it's at Grand Central Station or Ground Zero, or one of the three mobile units traveling the county—that inspires people to speak frankly with loved ones and friends about the most personal and difficult aspects of their lives. As listeners to the weekly StoryCorps broadcasts on NPR's Morning Edition can attest, the intimacy and resonance of these exchanges are breathtaking. Radio documentarian Isay, whose many awards include four Peabodys and a MacArthur, founded StoryCorps in 2003 in the belief that "if we take the time to listen, we'll find wisdom, wonder, and poetry in the lives and stories of the people all around us." With more than 10,000 conversations already archived at the Library of Congress' American Folklife Center, Isay is creating an invaluable oral history of America. Here he presents 49 profoundly moving conversations about love and friendship, family and work, war and immigration, survival and loss, nearly overwhelming testimony to the strength and goodness of people in an often inexplicably harsh world. Copyright 2007 Booklist Reviews.

Through two recording booths in New York (at Grand Central Station and Ground Zero) and two mobile booths touring the nation, StoryCorps collects the memories of everyday Americans in a momentous act of oral history. Here are some of the best stories, picked by -StoryCorps founder Isay. With a seven-city tour. Copyright 2007 Reed Business Information.

Isay (Flophouse: Life on the Bowery ) has devoted almost two decades of his life to various documentary studies, firmly believing that the soul of the nation is found in the stories of its everyday people, a belief that any reader of this oral history collection will come to support. The interviews in this book are excerpted from the more than 10,000 collected by StoryCorps, a singularly ambitious oral history project founded by Isay and colleagues in 2003. Since its humble beginnings in a rented recording studio in Manhattan's Chinatown, StoryCorps has interviewed people from all walks of life, in all 50 states. Participants receive a CD of their interview, and a second CD is placed in an archive at the American Folklife Center at the Library of Congress. In this gathering from their massive undertaking, we read the tales of survivors, trailblazers, bounty hunters, teachers, doctors, and bus drivers, to name a few. Some of their stories are excruciatingly tragic, revolving around events burned into our collective memory. Others are so sweetly personal that one might feel voyeuristic reading them. Highly recommended. [See Prepub Alert, LJ 6/15/07.]—Tessa L.H. Minchew, Georgia Perimeter Coll., Clarkston

Four years ago. StoryCorps set out to record an oral history of America with the voices of everyday people. This book is a collection of the most compelling excerpts from more than 10,000 interviews recorded, compiled by StoryCorps founder Isay (Flophouse ), a radio documentary producer and MacArthur fellow. And they are compelling. Each one captures a moment in time—historical, emotional or personal—that make us who we are. As simple stories of humanity, each one has its own potency, with themes of family, love, dedication and struggle. In one of the most emotionally wrought stories, a father sits down with his daughter and remembers her late mother and older brother, who both died of cancer within months of each other. To gather the stories, StoryCorps provides a facility, recording equipment and a facilitator, then waits for people to invite loved ones, friends, grandparents to sit down for a 40-minute session. A copy of the tape is filed in the Library of Congress, and parts have aired on NPR. As Isay says, "I realized how many people among us feel completely invisible, believe their lives don't matter, and fear they'll someday be forgotten." Photos. (Nov. 13)