Merle's door : lessons from a freethinking dog by Ted Kerasote. 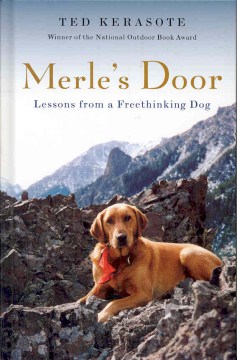 *Starred Review* Merle showed up at the San Juan River at the same time Kerasote and his river-rafting friends arrived. Merle looked at Kerasote as if to say, "You need a dog, and I'm it." He accompanied the group down the river and then went home to Wyoming with Kerasote. A dog who was eager to please and almost trained himself, Merle learned the ways of bison, ground squirrels, and coyotes. Merle then taught Kerasote the fullness of the hunt, leading Kerasote to his favorite prey. But, after Kerasote installed a dog door, the main thing Merle taught him is that a dog develops to his full potential, becoming the dog he was meant to be, when allowed to make his own decisions. Merle developed a life of his own, patrolling the small settlement where they lived with his dog companions, and yet was always very aware of Kerasote and his schedule. In telling Merle's story, Kerasote also explores the science behind canine behavior and evolution, weaving in research on the human-canine bond and musing on the way dogs see the world. Merle is a true character, yet Merle is also Everydog. An absolute treasure of a book.

The trend in best-selling memoirs about dogs sparked by John Grogan's Marley & Me bodes well for this engaging new work by National Outdoor Book Award-winning author Kerasote, who introduces readers to a stray Labrador retriever mix to whom he became attached while on a camping trip in Utah. Their paths cross on the banks of the San Juan River, and for dog and man, life is forever altered. Merle is a free spirit with an enormous zest for life, good survival skills, and the dangerous habit of killing calves—he needs training! But Merle's lessons, Karasote writes, aren't as much about training as about partnership. Drawing on an extensive and exceptional list of references and including informative background on how animals learn and perceive their world, Kerasote gives readers much to consider that will enrich their own relationships with their pets. His book is highly recommended, but it does come with a tissue alert. And, because people seem to love well-written dog stories as much as they love their dogs, libraries may also want to stock up on similar titles, such as Jon Katz's A Good Dog .—Edell M. Schaefer, Brookfield P.L., WI

Lessons that Marley never taught you. A Lab mix, subsequently named Merle, was living wild when he encountered National Outdoor Book Award winner Kerasote and elected to come home with him. But Merle runs off whenever he wants through a door Kerasote kindly built. Copyright 2007 Reed Business Information.

Humorous, jubilant and touching by turns, this story of the relationship between man and dog is informed by the author's grasp of animal research and his attachment to Merle, a stray dog he adopted. A Labrador mix, Merle first appeared while the author was on a camping trip. Kerasote (Out There: In the Wild in a Wired Age ), an award-winning nature writer, decided to take his canine friend home to rural Wyoming. This chronicle of their 13 years together is interspersed with studies by animal behaviorists that strengthened Kerasote's desire to see Merle as a responsible individual rather than a submissive pet. Merle set his own eating schedule (though not without early mishap), refused to hunt birds (although not elks) and, according to the author, possessed a range of emotions and sentiments similar to those of humans. Kerasote tends to anthropomorphize Merle's every look and movement, but this narrative is entertaining and Kerasote's strong love for Merle and enthusiasm for life in the wild will win over many readers. Kerasote's joyous relationship with Merle is balanced by a bittersweet account of a close relationship the author had with Alison, a neighbor and fellow dog owner. Kerasote's last weeks with the dying Merle are beautifully rendered. (July)