Blood of the wicked / Leighton Gage. 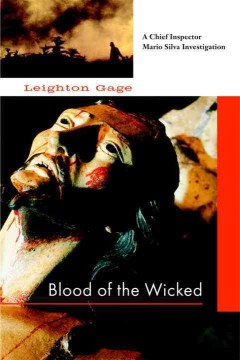 In the opening pages of Gage's emotionally charged debut, Brazilian Chief Inspector Mario Silva is dispatched from police headquarters in Brasilia to rural Cascatas do Pontal to investigate the assassination of Bishop Dom Felipe Antunes. Unlike his predecessor, Bishop Antunes was unsympathetic to the Landless Workers' League, an organization that advocates, not always peacefully, for equal distribution of land among rich and poor. (A similar group actually exists in Brazil.) A long history of strife between wealthy landowners and the league prompts Chief Inspector Silva and his policeman nephew, Hector, to tread very carefully as they gather clues in the case. Then, when a crackerjack local journalist on the verge of breaking a seemingly unrelated story is found with her throat slit, Silva and his partner are forced to extend their stay in the sticks. Chief Inspector Silva, a seasoned cop determined to avenge his father's brutal murder, is the most engaging among a cast of broadly drawn characters. Gage, a part-time resident of Brazil, vividly evokes a country of political corruption, startling economic disparity, and relentless crime, both random and premeditated. Copyright 2007 Booklist Reviews.

Brazil. The name conjures up a seductive image of a bikini-clad girl dancing the samba along a Rio beach. But it is also a country with deep-rooted social and political problems, where less than one percent of the population owns half the arable land, where the wealthy live in gated, guarded luxury while the poor are crammed into squalid favelas , or shantytowns, and where corrupt local police enforce their own laws. Against this backdrop, Gage, who lived in Brazil for many years, sets his debut mystery, a gripping and brutal tale of murder and vengeance. When a sniper's bullet cuts down a bishop in an agricultural town in the state of So Paulo, Chief Inspector Mario Silva of the Brazilian Federal Police is ordered to investigate. Was the bishop, who disapproved of liberation theology, assassinated by a radical priest seeking to redistribute land to the poor, or was he killed by powerful landowners offended by his sermon condemning the recent gruesome murder of an activist and his family? The body count rises, as Silva and his team find their probe hampered by crooked cops, ambitious reporters, and missing witnesses. Sensitive readers, be warned: there are graphic scenes of horrific violence. But Gage's inspector is a fascinating character, a man who once dispensed his own brand of Brazilian justice now charged with upholding the law of the land. Highly recommended.—Wilda Williams, Library Journal

At the start of Gage's bloody debut, Chief Insp. Mario Silva is asked by his boss, the director of the Brazilian Federal Police, to solve the murder of Bishop Dom Felipe Antunes, who was assassinated at a church consecration in the remote Brazilian town of Cascatas. However, tensions between landowners and the Landless Workers' League embroil Silva in local politics when he must put equal resources into solving the disappearance of a local landowner's son, Orlando Muniz Junior. Priestly pedophilia, kidnappings and more murders punctuate the escalation of the conflict between landowners and reformers, while Silva also grapples with his personal demons, having tracked down and killed both his father's and brother-in-law's murderers. By the end of this brutal novel, it's hard to care who killed whom. It's also a miracle that Silva, who seems increasingly ineffectual, survives the mayhem. This ultraviolent mystery is not for the faint of heart. (Jan.)

The Bridge of SighsSteinhauer, Olen

With our blessing: an Inspector Tom Reynolds mysterySpain, Jo