Mudbound : a novel / by Hillary Jordan. 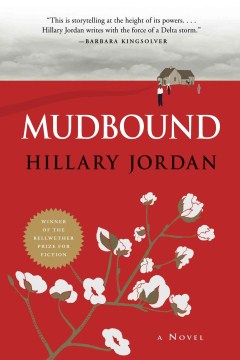 *Starred Review* "When I think of the farm, I think of mud," says Laura, the main character in this sophisticated, complex first novel. Jordan sets her narrative in the rural Mississippi Delta in the immediate post–World War II period. Thematically, the novel charts the evolution of a wifely role—the evolution of Laura's new life—when she marries at a relatively late age and moves from her comfortable existence in Memphis (her father was a professor and she an English teacher in a private school) to a rough Delta farm when her new husband decides to forgo his engineering profession to live out his dream of cultivating the soil. The narrative is told in alternating first-person accounts (each voice rendered distinctive and authentic to the character), as Laura, her plain and steady husband, her dashing brother-in-law, and other individuals now significant in Laura's new life (one of whom is the returned GI-son of their black tenant farmer) tell their sides of the devolving events in Laura and her husband's move to this remote and rigid environment. In addition to the material deprivation Laura must endure, racism in the area is full-blown and horrible, most apparent in the face of her father-in-law, who has come to live with Laura and her husband. When her brother-in-law returns from his postwar wanderings about Europe, at first he brings a bright, new light to shine on Laura. She falls in love with him, but, ultimately, the light illuminates only ugliness. Copyright 2007 Booklist Reviews.

Jordan's poignant and moving debut novel, winner of the 2006 Bellwether Prize, takes on social injustice in the postwar Mississippi Delta. Here, two families, the landowning McAllans and their black sharecroppers, the Jacksons, struggle with the mores of the Jim Crow South. Six distinctive voices narrate the complex family stories that include the faltering marriage of Laura and Henry McAllan, the mean-spirited family patriarch and his white-robed followers, and returning war heroes Jamie McAllan and Ronsel Jackson. In every respect, the powerful pull of the land dominates their lives. Henry leaves a secure job with the U.S. Army Corps of Engineers to buy their farm, never noticing that the refined and genteel Laura dreams of escaping the pervasive mud and dreary conditions of farm life. Ronsel, encouraged by his war-hero status as a tank commander, wants to break away from the past and head North to a better future, while his parents, knowing no other life but farming, struggle to buy their own land. Jordan faultlessly portrays the values of the 1940s as she builds to a stunning conclusion. Highly recommended for all public libraries.—Donna Bettencourt, Mesa Cty. P.L., Grand Junction, CO

Jordan's beautiful debut (winner of the 2006 Bellwether Prize for literature of social responsibility) carries echoes of As I Lay Dying , complete with shifts in narrative voice, a body needing burial, flood and more. In 1946, Laura McAllan, a college-educated Memphis schoolteacher, becomes a reluctant farmer's wife when her husband, Henry, buys a farm on the Mississippi Delta, a farm she aptly nicknames Mudbound. Laura has difficulty adjusting to life without electricity, indoor plumbing, readily accessible medical care for her two children and, worst of all, life with her live-in misogynous, racist, father-in-law. Her days become easier after Florence, the wife of Hap Jackson, one of their black tenants, becomes more important to Laura as companion than as hired help. Catastrophe is inevitable when two young WWII veterans, Henry's brother, Jamie, and the Jacksons' son, Ronsel, arrive, both battling nightmares from horrors they've seen, and both unable to bow to Mississippi rules after eye-opening years in Europe. Jordan convincingly inhabits each of her narrators, though some descriptive passages can be overly florid, and the denouement is a bit maudlin. But these are minor blemishes on a superbly rendered depiction of the fury and terror wrought by racism. (Mar.)

At the edge of the orchardChevalier, Tracy

The secret of magicJohnson, Deborah, 1958-