The toss of a lemon / Padma Viswanathan. 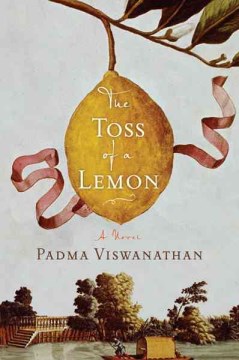 With an assured voice and a deep understanding of her characters' moral values, Viswanathan breathes life into the social changes that swept through early- to-mid-twentieth-century Tamil Nadu, India. In 1896 10-year-old Sivakami becomes the child bride of a healer predicted to die young. Left a widow at 18, she dutifully obeys her Brahmin heritage's millennia-old customsâ€"strict rules dictating her appearance, food preparations, even whom she may speak with or touch. Sivakami devotes her life to her family, but her decisions on daughter Thangam's marriage and son Vairum's secular education occasionally have heartbreaking results. Janaki, Sivakami's similarly conservative granddaughter, later grows to adulthood in an India  that comes to view Brahmins not as a proud, mutually supportive people but as racially pure bigotsâ€"an opinion her  uncle Vairum  shares. Despite the saga's length, there are no dull moments or extraneous scenes. Most impressively, Viswanathan immerses readers in the realities of the caste system from both sides; in telling a universal story of generational differences on a personal level, she makes a vanished world feel completely authentic. Superbly done. Copyright 2006 Booklist Reviews.

Married at ten and widowed at 18, Sivakami is able to leave the family compound only three times for the rest of her life. Far-fetched? Actually, Viswanathan drew on her grandmother's life to craft this highly touted debut. Copyright 2008 Reed Business Information.

Viswanathan's enormous first novel spans 66 years—from 1896 to 1962—in the life of one Tamil family. The matriarch of the clan, Sivakami, a Brahmin, was married at ten and widowed at 18. Already a mother of two, Sivakami was determined to set a pious example. This meant that she shaved her head, wore only white, and touched no one, not even her children or grandchildren, between dusk and dawn. What's more, she obeyed the custom of staying inside her home, venturing outdoors only three times in the many decades before her death. Sivakami's proscribed world is portrayed in amazing detail, and the life of the Brahmin elite is vividly captured. Unaccountably, the book fails to mention Gandhi—a prominent figure in this era—making the political landscape somewhat incomplete. This is especially odd since social change forms the backdrop of Viswanathan's sweeping narrative. Still, the portrait she paints is dazzling. Gender rules, class relations, and the political castes of late 19th- and early to mid-20th-century India are well presented, making this an important work of historical fiction. Highly recommended for all collections. [See Prepub Alert, LJ 5/1/08.]—Eleanor J. Bader, Brooklyn

Journalist, playwright and short-story writer Viswanathan's absorbing first novel, based on her grandmother's life, goes deep into the world of southern India village life. Starting in 1896, the story follows Sivakami, a Tamil Brahmin girl, from her marriage at the age of 10 through her long widowhood, while Indian political and social life lumbers through immense changes. Before he dies, Sivakami's astrologer husband, Hanumarathnam, foresees his death in the malignant interactions between his stars and his son Vairum's. Though he trains a trustworthy servant to assist Sivakami until their son comes of age, the world that Hanumarathnam leaves behind is rapidly changing, and the family is not entirely fit to survive it; Vairum, especially, suffers the pain of a father's disaffection and, later, a widowed mother forbidden to touch any human being during daylight hours. Irreconcilable conflicts between tradition—especially the strict caste rules of Brahmin life—and the modernizing world lead predictably to alienation and tragedy, but on an epic scale. Viswanathan is especially adept at unobtrusively explaining foreign customs and worldviews to Westerners while wholly respecting the power and significance they hold for practitioners. (Sept.)

The space between usUmrigar, Thrity N.

An atlas of impossible longingRoy, Anuradha

Song of the cuckoo birdMalladi, Amulya