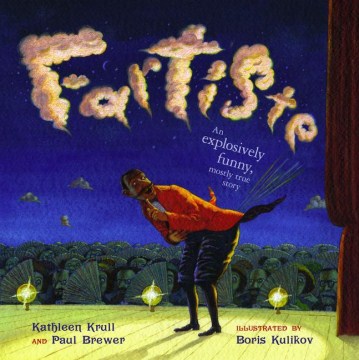 When it comes to expelling gas, don't equate the Fartiste with Walter the Farting Dog. Joseph Pujol was the real thing, a Frenchman who startled and entertained with his abilities while passing gas. As Krull recounts in indefatigable rhyme, Joe realizes his talent at a young age; later, in the army, his buddies fall on the floor, as he squeezes out some songsâ€"or the loud sounds of war. For a while, Joe is content to be a baker, but with eight children to feed, he decides to take his show on the road. A visit to the Moulin Rouge turns into a stint as one of the showplace's great attractions, and he entertains not only his fellow countrymen but also the likes of Belgium's King Leopold and Sigmund Freud. Kids who think regular old farting is funny will be delighted with Pujol's ability to elevate the genre. Authors Krull and Brewer easily find humor in gassiness, and artist Kulikov is right behind them (so to speak), presenting images such as gas clouds filled with muscial notes (Pujol can play Debussy in farts). An afterword cites the facts in the whole amazing story. Copyright 2006 Booklist Reviews.

The Gas We Pass gets put to practical use. Krull and husband Brewer must have known they'd struck picture-book-biography gold when they discovered Joseph Pujol, a Moulin Rouge performer renowned for "blasting out tunes from his own derriere." As detailed in the playful rhyming text, Pujol first realized he had this unique gift when, at age eight, he dove into the ocean near his hometown of Marseille, sucking water and air into his sphincter. "One minute, by chance, he was flexing his gut. / The next, he had sounds coming out of his butt!" Kulikov's mixed-media paintings convey the gaiety of turn-of-the-century Parisian theater and put forth creative representations -- firework-style blasts, heart-shaped clouds, etc. -- of Pujol's gaseous emissions. Careful observers will find Freud, whom Krull and Brewer identify in their afterword as a Pujol fan, watching a performance with furrowed-brow intensity. The other audience members, apparently not busy formulating theories of anal fixation, first look at Pujol in wide-eyed astonishment, then laugh uproariously -- a response likely to be shared by most readers under twelve. Copyright 2008 Horn Book Magazine Reviews.

True story: a boy discovers he has an unusual command over the muscles in his intestines. With lots of practice and ambition, Joseph Pujol becomes the Fartiste, the fin-de-sicle sensation of the legendary Moulin Rouge. "A bit of Beethoven, a song by Mozart," write Krull (the Lives of... series) and Brewer (You Must Be Joking! ) in their rhyming quatrains, "A Debussy ditty—all through a fart." (Respectful of their audience's curiosity, the authors also note, "his flatulent actions completely lacked smell.") Clearly tickled by the subject matter, Kulikov (The Castle on Hester Street ) employs a brassy palette and broad, earthy expressions reminiscent of vintage theatrical posters; he captures both Pujol's consummate showmanship and the joie de vivre of the gas-lit (no pun intended) bohemian world that embraced him. As for the famous flatulence, even the politest company will find its visual interpretation apropos: Kulikov draws each breaking of wind as a cross between a Botticelli-esque cloud and a comic-strip text balloon. The don't-miss afterword discloses that Pujol's actual stage name was Le Petomane (the Fartomaniac) and that his fans included—mais oui! —Sigmund Freud. Ages 4–8. (June)

The artist who painted a blue horseCarle, Eric

The iridescence of birds: a book about Henri MatisseMacLachlan, Patricia