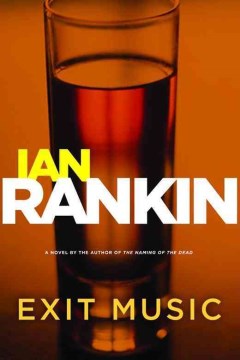 *Starred Review* Twilight is the operative word for UK crime fiction this fall. First, John Harvey brings back the great Charlie Resnick (Cold in Hand), only to leave the Nottingham inspector slouching toward retirement with a new tragedy to bear. And now Ian Rankin hands a gold watch to the ever-curmudgeonly John Rebus. With only a few days until he's officially retired, Rebus isn't going gently into any good nights, though he's not above feeling a bit maudlin: â€œCiggies, booze, and a little night music. What else did he have?â€ Fortunately, he has one last meaty caseâ€"the murder of a dissident Russian poet, passing through Edinburgh on a speaking tour. There's much more to it than that, of course, and soon enough Rebus smells a wholesale cover-up involving a group of Russian businessmen being courted by the city's power elite. Also in the mix is Rebus' longtime nemesis (and ironic alter ego), crime boss Big Ger Caverty, who faces his own kind of twilight. Rankin hits every note on the nose here, from the mixed emotions of Rebus' longtime partner Siobhan Clarke, eager for promotion yet reluctant to see her mentor edging toward mortality, to Rebus' bullheaded insistence on going out the way he came in, â€œmistrusting teamworkâ€ in all its guises, or, as Siobhan describes his career, â€œdecades of bets hedged, lines crossed, and rules broken.â€ The joy of a Rebus novel has always been reveling in those broken rules and crossed lines. What is the appeal of character-driven crime fiction, you ask? Watching Rebus do his job and stick it to every company man (or woman) who gets in his way. Copyright 2006 Booklist Reviews.

A dissident Russian poet is dead in what looks like a mugging that got out of hand, but Detective Inspector John Rebus knows better. With a six-city tour. Copyright 2008 Reed Business Information.

All good things must come to an end, and Rankin's Inspector Rebus series does so in the aptly titled Exit Music . Rankin began planning this swan song when one of his police consultants pointed out that in 2007 Rebus would be set to retire at the mandatory age of 60. For fans of John Rebus, it's a tough book, because every page turned means getting closer to having to say goodbye to an old friend. The story itself is a complicated yarn involving a poet, a diplomat, an audio engineer, financiers, and politicians. But the plot definitely takes a back seat to the character studies—of Rebus, Siobhan Clarke, and many other notable names from the series. The case and the book are both a fitting end to the storied career of one of Edinburgh's finest; plots and characters are tied up nicely, but not with too neat a bow. Strongly recommended for all libraries. [See Prepub Alert, LJ 6/15/08.]—Amy Watts, Univ. of Georgia Lib., Athens

Insp. John Rebus has just 10 days to solve the apparently motiveless murder of Alexander Todorov, an expatriate Russian poet, before he reaches 60 and mandatory retirement in Edgar-winner Rankin's rewarding 17th novel to feature the Edinburgh detective (after The Naming of the Dead ). When the dogged Rebus and Det. Sgt. Siobhan Clarke look into the crime, they find an array of baffling conspiracies involving Russian businessmen, Scottish bankers and local politicians pushing for an independent Scotland. A second murder, of a man who'd taped one of Todorov's poetry readings, ensures the case gets extra resources, and Rebus's own interest is whetted by the possible involvement of Edinburgh crime boss "Big Ger" Cafferty. Clever, insightful prose more than compensates for the byzantine plot. There's an appropriately wistful tone to this final entry in the series. Fans will miss Rebus and wonder what on earth he'll do in retirement. (Sept.)

The writing on the wallStaalesen, Gunnar, 1947-