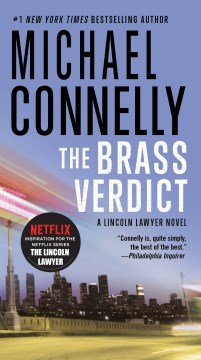 *Starred Review* It hasn't gone well for L.A. lawyer Mickey Haller since the events described in The Lincoln Lawyer (2005). The recovery from being shot was slow, and the addiction to prescription drugs was worse than the recovery. But Haller has kicked the pills and is ready to practice law again when his friend and fellow attorney Jerry Vincent is murdered, and Mickey inherits all Vincent's cases, including a career-maker: the trial of a studio executive accused of killing his wife and her lover. Quickly, Mickey realizes he's caught in the middle: defending the mogul requires concealing facts that could help solve the Vincent murder. OK, Mickey's used to playing fast and loose with the cops, but the investigating officer, Harry Bosch, knows when he's being played. Careful Connelly readers will know that there's a connection between the author's two heroes, Bosch and Haller, even though this is the first time the two  costarred together  (see The Black Light, 1993). Connelly plays the dueling characters off against one another effectively, especially for those familiar with the previous books, but it isn't all about backstory. Like Lincoln Lawyer, this is a fine legal thriller, full of both electric courtroom scenes and fascinating behind-the-scenes stuff about the business of lawyering. Connelly is justly celebrated for his characters and his ability to create mood from the sights and sounds of L.A., but he's also a terrific plotter, and that skill is in high relief here. Essential for fans; a great read for anybody. Copyright 2006 Booklist Reviews.

Mickey Haller takes the case of a Hollywood lawyer who's been murdered--and discovers that the killer is now after him. With a ten-city tour. Copyright 2008 Reed Business Information.

Mickey Haller, last seen in The Lincoln Lawyer , returns to the courtroom in an unusual way here. Former colleague Jerry Vincent is murdered, and his caseload is dropped in Haller's lap. One of Vincent's high-profile cases involved a movie mogul accused of killing his wife and her lover in a jealous rage. As Haller prepares the mogul's defense, he discovers that Vincent's killer might have chosen him as the next target. Haller must trust Harry Bosch, the police officer investigating Vincent's murder, if he is going to survive and trust his instincts if he is going to succeed in convincing a jury of his client's innocence. Connelly is firing on all cylinders in this epic page-turner. The intriguing story line, the chance to view Bosch from another perspective, and Haller's reappearance as a main character add up to a fantastic read. One of the best thrillers of the year and a mandatory purchase for all public libraries. [See Prepub Alert, LJ 6/15/08; $1 million marketing campaign.]—Jeff Ayers, Seattle P.L.

Bestseller Connelly delivers one of his most intricate plots to date in his 20th book, a beautifully executed crime thriller. When L.A. lawyer Mickey Haller, last seen in The Lincoln Lawyer (2005), inherits the practice and caseload of a fellow defense attorney, Jerry Vincent, who's been murdered, the high-profile double-homicide case against famed Hollywood producer Walter Elliot, accused of shooting his wife and her alleged lover, takes top priority. As Haller scrambles to build a defense, he butts heads with LAPD Det. Harry Bosch, the stalwart hero of Connelly's long-running series (The Black Echo , etc.), who's working Vincent's murder. When Haller realizes that the Elliot affair is bigger than simply a jealous husband killing his cheating wife, he and Bosch grudgingly agree to work together to solve what could be the biggest case in both their careers. Bosch might have met his match in the wily Haller, and readers will delight in their sparring. 10-city author tour. (Oct.)

The keeper of lost causesAdler-Olsen, Jussi
The moving targetMacdonald, Ross, 1915-1983