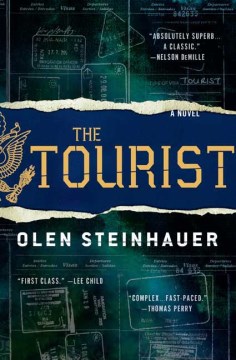 *Starred Review* Charles Alexander s soul has been destroyed by his work. A CIA black-ops agent (called a "Tourist"), he is postponing his suicide just long enough to complete one more job. Very early on September 11, 2001, the job goes disastrously wrong. He lives. Six years later, he has become Milo Weaver, still a Company man but now a devoted family man, too. Accused of murdering a colleague—his best friend—he s forced to go on the run to clear his name. Evidence suggests that the bad guys might share his travel agent. And, as Weaver s own mysterious past comes into play, his hard-won happiness hangs by a fraying thread. The premise isn t new, but what s noteworthy is the way Steinhauer manages to push the genre s darker aspects to the extreme—his hero s alienation is part of the cost of carrying out orders whose true origins and ultimate effects are often unknowable—without sacrificing the propulsive forward momentum on which a spy story depends. And Weaver, smart but sometimes not smart enough, is the perfect hero for such a richly nuanced tale. Steinhauer s excellent Eastern European quintet (Victory Square, 2007) didn t make him the star he deserves to be, and his publisher is banking on this one to do the job. They re making comparisons to the classic spy novels of le Carré, Greene, and Deighton—heavy hype, but it s largely justified. Copyright Booklist Reviews 2008.

Superbly accomplished at both plotting and characterization, Steinhauer, in a change of pace from his series of Eastern European thrillers (e.g., The Bridge of Sights; Victory Square), offers an emotionally damaged protagonist who is an experienced spy or "tourist" but now a family man and desk-bound agent of the post-9/11, scandal-ridden CIA. When Milo Weaver is called back to fieldwork and assigned to capture an international assassin, it sets off an investigation into one of Milo's colleagues. The story is long and complicated but compelling and hard to put down. As is true of the better spy novels, the theme here is betrayal. Forays into blind alleys, puzzling clues, lapses of judgment, narrow escapes, and ingenious attainment of objectives establish Milo as a skilled operative performing difficult tasks while being systematically deceived by compatriots and adversaries. Accepting the contemporary story as potentially realistic, readers are led into hoping that their country's intelligence-gathering leadership is actually in better hands—and performing for less venal reasons—than the novel suggests. Appropriately, this story includes a full measure of cynicism, very little humor, and a tender conclusion. Highly recommended for all public libraries.—Jonathan Pearce, California State Univ., Stanislaus

Edgar-finalist Steinhauer takes a break from his crime series set in an unnamed Eastern European country under Communist rule (Liberation Movements, etc.) to deliver an outstanding stand-alone, a contemporary spy thriller. Milo Weaver used to be a "tourist," one of the CIA's special field agents without a home or a name. Six years after leaving that career, Milo has found a certain amount of satisfaction as a husband and a father and with a desk job at the CIA's New York headquarters. The arrest of an international hit man and a meeting with a former colleague yank Milo back into his old role, from which retirement is never really possible. While plenty of breathtaking scenes in the world's most beautiful places bolster the heart-stopping action, the real story is the soul-crushing toil the job inflicts on a person who can't trust anyone, whose life is a lie fueled by paranoia. George Clooney's company has bought the film rights with the actor slated to star and produce. 100,000 first printing; author tour. (Mar.)