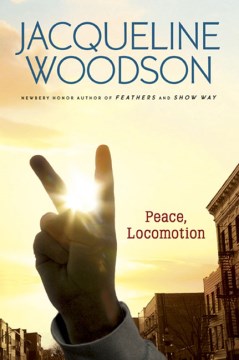 "In a moving companion to the National Book Award Finalist Locomotion (2003), Lonnie, now in sixth grade, speaks in letters to his beloved little sister, Lili. The siblings are still heartbroken about their separation, which followed the death of their parents in a fire. Both kids are now safe in loving foster families in their Brooklyn neighborhood, with friends and supportive teachers at school. After Lonnie s foster brother returns home injured from war, the contrast between the peaceful home and the tragedy of war feels savage. While this does not have Locomotion s poetic form, the spare, beautiful prose—both the dialogue and the fast first-person narrative—is as lyrical as the first book. The simple words are packed with longing and are eloquent about the "little things people don t think real hard about," little things that reveal the big issues of family, community, displacement, war, and peace." Copyright 2008 Booklist Reviews.

In Locomotion (rev. 3/03) eleven-year-old Lonnie Collins Motion told his story in a collection of sixty poems. In this sequel, he continues his story not in poems but in letters he writes to his younger sister, Lili. Lonnie's writing still grows from his memories of their parents and how much he misses them and his sister, who lives with a different foster family. Here, Lonnie also misses his fifth-grade teacher, kind Ms. Marcus, who taught him to write poetry. His sixth-grade teacher tells him he's not a poet until he's published a poem; luckily, she leaves midyear, but it takes Lonnie a while to regain his confidence after that one thoughtless comment. Lonnie also writes about his friends at school and about his foster family, Miss Edna and her adult sons Rodney (who has moved back home) and Jenkins (who's fighting in Iraq). When Jenkins returns home, he is minus a leg, but in this admirably unsentimental novel Jenkins comes to appreciate that he has gained a little brother, one who shows him that it's possible to keep on living despite devastating losses. As in the first book, Lonnie's honesty makes readers believe in him and his writing; that his yearning for peace -- for himself and his sister, for his foster family, for the world -- comes across so subtly yet so powerfully is a testament to Woodson's strength as a writer. Copyright 2009 Horn Book Magazine Reviews.

Following the character introduced in Locomotion, Woodson switches from poetry to letters to show how 12-year-old Lonnie Collins Motion, aka Locomotion, maintains a bond with his younger sister, Lili. He reminds her of their past: "There was a time before your foster mama came and said, 'I'll take the little girl but I don't want no boys.' " Besides missing his sister and their late parents, Lonnie has other problems to cope with (his foster mother's son returns from Iraq disabled and traumatized). In his letters, Lonnie shares the big and small details of his days, works through philosophical struggles (a friend tells him that "Miss Edna was my mama now"), and includes some of the tender poems he composes. Although the epistolary motif makes for some stilted writing, Woodson creates a full-bodied character in kind, sensitive Lonnie. Readers will understand his quest for peace, and appreciate the hard work he does to find it. Ages 9–12. (Jan.)