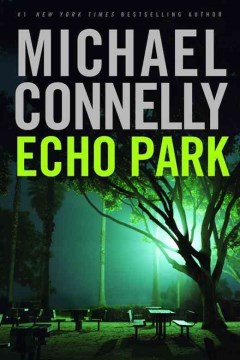 /*Starred Review*/ Harry Bosch is still on the job, working out of LAPD's Open Unsolved Unit, and despite his best efforts at holding his antiestablishment impulses in check, he's in trouble again. This time the problem is an unsolved case that has haunted Harry since 1993. Now it appears that the killer has been caught, apprehended by chance and connected to a string of nine additional murders. As cops and prosecutors debate a plea bargain--the killer will confess to the murders if he can avoid the death penalty--it is revealed that Harry and his partner may have missed a crucial clue back in 1993 that could have solved the case then and prevented the later murders. But something doesn't feel right. As in The Closers (2005), Harry once again may be the victim of a politically inspired conspiracy, or "high jingo" in cop talk. Connelly remains a master at constructing plots that, like contrapuntal themes in music, echo one another. As we watch Harry confront the train wreck that could destroy his career, we also see him dealing with a potentially even more serious crisis being played out internally: Can he recover from the knowledge that his oversight may have resulted in nine murders? Is he a good cop with no tolerance for phonies, or is he, in fact, as his enemies have always argued, an uncontrollable rogue whose hubris costs lives? The answers to these questions are not as clear cut as one might assume, with Connelly forcing Harry's many fans to accept the harsh truth that the genre's most compelling hero may also be one of its most flawed. Superior crime fiction, as suspenseful as it is psychologically acute. ((Reviewed August 2006)) Copyright 2006 Booklist Reviews.

After an accused serial killer confesses to a long-ago murder that Harry Bosch couldn't crack, Harry realizes he missed a vital clue that might have put the man behind bars and saved lives. Not a good feeling. With a seven-city tour. Copyright 2006 Reed Business Information.

Harry Bosch, still working for the Open Unsolved (cold cases) Unit, is brought into a new scenario. The killer in question claims to be responsible for a number of older cases, including one that centered on the disappearance of a woman whose body was never found. Bosch, still haunted by those circumstances, has been hounding another man he thinks is responsible. As he and partner Kiz Rider are pulled further into the prosecution of the alleged killer, Bosch learns that nothing is as it seems. Sidelined from the case after an incident, he teams up with FBI agent Rachel Walling (first introduced in The Poet ) and continues to investigate. Connelly offers strong action writing and exciting plot twists, coupled with more development of Boschâ€™s character and his internal conflicts. Another excellent and riveting entry in the longstanding series by one of mystery fictionâ€™s best writers. [See Prepub Alert, LJ 6/15/06.]â€"Elizabeth B. Lindsay, Washington State Univ. Libs., Pullman

Bestseller Connelly's compelling 12th Harry Bosch novel (after 2005's The Closers ) offers some new wrinkles on a familiar theme the aging detective haunted by the one who got away. In Bosch's case, the elusive quarry is the man who abducted a 22-year-old equestrian, Marie Gesto, in 1993. Having returned to active duty as a member of the LAPD Open-Unsolved Unit, Bosch repeatedly pulls the file to see if he can discover something new and give some small solace to the victim's parents. When a chance police stop of a suspicious vehicle nets serial killer Raynard Waits, who's carrying body parts in his van, Bosch assesses the murderer's claim that he was responsible for killing Gesto, too. The weary and cynical detective soon suspects that Waits is trying to barter information for a reduced sentence of life imprisonment. Political motivations connected with the upcoming DA election also cloud the investigation. Smooth prose and plausible characters even the secondary figures elevate this several notches above the standard cop vs. serial-killer thriller. Author tour. (Oct.)