The cold light of mourning / A Mystery Elizabeth J. Duncan. 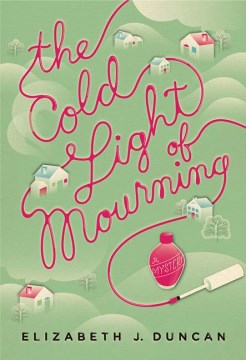 This debut mystery is a winner of the Minotaur Books/Malice Domestic Best First Traditional Mystery Novel Competition. Manicurist and owner of the Happy Hands Nail Care shop, Penny Brannigan is a transplanted Canadian who has been living in Llanelen in northern Wales since she came to the country as a backpacker years ago. While still dealing with the recent death of a good friend, Penny is hired to do the nails of the bridal party for the wedding of local Emyr Gruffydd to Londoner Meg Wynne Thompson. Meg Wynne disappears on her wedding day, apparently after having her nails done. Penny becomes involved when she realizes that the woman whose nails she did that day was not Meg Wynne. Penny and a new friend, Victoria, assist Detective Chief Inspector Davies with his investigation, sometimes clumsily, but they ultimately solve the mystery. Well-developed characters and a nicely delineated Wales setting are what make this stylish cozy work. A well-deserved award winner. Copyright 2009 Booklist Reviews.

On her wedding day, Meg Wynne Thompson disappears between having a manicure and getting her hair done. The quiet Welsh town of Llanelen is stunned by a full police investigation, the arrest of Meg's fianc, and the death of his father. But manicurist Penny Brannigan, an expatriate Canadian, realizes the woman who came to her salon was an imposter and seeks to find the truth. Duncan, the first Canadian winner of the Minotaur/Malice Domestic Best First Traditional Mystery Novel competition, lulls readers with her soothing prose and depiction of small-town life in Wales and then startles them with a shocker of a denouement. Readers who enjoy Louise Penny, another Canadian mystery author of note, and Charlaine Harris's Aurora Teagarden mysteries will love this one. [Library marketing.]

A runaway bride is the linchpin of Canadian writer Duncan's delightful debut, which has won the Minotaur/Malice Domestic Best First Traditional Mystery Novel Competition. Expatriate Canadian manicurist Penny Brannigan is grieving after the death of a dear friend when the major event of the year occurs in the town of Llanelen, Wales. Social climber Meg Wynne Thompson isn't universally loved, and when she disappears on her wedding day, a case of jilting at the altar takes on more sinister overtones. Speculation swirls around various members of the bridal party, including the bewildered groom and the suave best man. But Penny, who thinks there was something odd about one client at her salon on the fateful morning, shares her observations with Det. Chief Insp. Gareth Davies and asks uncomfortable questions that place her and a colleague in danger. The scenic Welsh backdrop, village personalities and a budding romance for Penny add color and interest. (May)

In Gash's jaunty 24th Lovejoy mystery to feature the crooked East Anglian antiques expert with a weakness for women (after 2004's The Ten Word Game), Lovejoy accepts an offer of early release from prison on condition he work for a speed-dating service run by Laura Moon, a wealthy divorce. Part of the deal, he soon learns, is to wed Laura in a ploy to bring her ex-husband, a confidence trickster, out of hiding. Lovejoy agrees, but before the ink is dry on the marriage register, a couple of his friends suffer fatal accidents. The rambling plot involves "white tribes," people who control fortunes in old jewels and curios that could potentially flood the antiques market. While Gash makes the British slang easy to follow for American readers and throws in plenty of authentic antiques lore, this dated tale with its often grating protagonist is unlikely to win the author many new fans. (Dec.)

Buried in a bogConnolly, Sheila

Murder in an Irish villageO'Connor, Carlene