The wolf in the parlor / The Eternal Connection Between Humans and Dogs Jon Franklin. 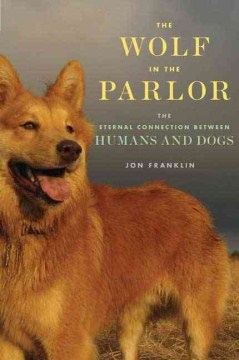 *Starred Review* What does it signify, this powerful bond between a tropical primate and a northland wolf? Why do so many of us, transformed primates, keep dogs, the transformed wolf? Newspaper science writer (The Molecules of the Mind, 1988) Franklin had always been interested in the big sciences, and loved writing about discoveries in anthropology, brain chemistry, archaeology, physics—but not about dogs. And yet, when he married a dog lover, the place of the dog in human life and human evolution became a question that needed to be answered. In his wanderings through libraries, his discussions with zooarchaeological researchers, and his observations of how his wife's new puppy integrated himself into the family, Franklin begins to discover that dogs are everywhere, and in every society. And yet humans give dogs no serious notice, a fact that roused the investigative reporter in the author. The result of his obsession with discovering the root of the human-dog relationship is this impossible-to-put-down book, a peregrination through the personal, the historical, the ethological, the anthropological, and the ecological as Franklin discovers how dogs and humans changed each other in the thousands of years they've been together. A true gem. Copyright 2009 Booklist Reviews.

Love me, love my dog-and two-time Pulitzer Prize winner Franklin puts his demonstrated talents to use investigating evolutionary science, archaeology, and more to discover why. The serious side of Marley and Me-and, yes, dog books are the Great Danes of pet publishing. Copyright 2009 Reed Business Information.

Pulitzer Prize-winning science reporter Franklin (The Molecules of the Mind) offers an original and interesting blend of memoir and science, a kind of scientific Marley & Me penned by the likes of Stephen Hawking. After Franklin's wife persuaded him to acquire a standard poodle, which they named Charlie, his curiosity about dogs was triggered, launching him on a ten-year research project into the origins of the modern canine-human bond. He was surprised to discover that while much is known about the origins of others species, the dog's roots are elusive. With Charlie as his guide, Franklin slowly uncovered the mysteries of the human-animal bond and learned a thing or two about himself along the way. VERDICT Franklin does an exceptional job of telling the story of canine evolution, and his book will appeal to both students of animal behavior and dog lovers. Readers will see their own dog's behaviors mirrored in the activities of Charlie and his canine ancestors. [See Prepub Alert, LJ 5/1/09.]—Edell M. Schaefer, Brookfield P.L., WI

Pulitzer Prize–winning science journalist Franklin (Molecules of the Mind) draws on a slew of disciplines—evolutionary theory, zooarcheology, behavioral science, ethnology, bio-philosophy and keen firsthand observation—to formulate a challenging but enticingly plausible theory about the psychological leash binding humans and canines. His thesis: beginning about 12,000 years ago, as wild wolves evolved into "follower wolves" and were subsequently domesticated by early man, a kind of mind meld occurred. As this neurological attachment took shape, the dog shed 20% of its brain mass because, biologically, humans had "agreed to do its thinking" for it, while mankind lost 10% of its brain mass because dogs became "our beast of emotional burden." Franklin buttresses his inventive assertion with a combination of absorbingly loquacious ruminations on the behavior of his own dog, Charlie, and a rigorous compilation of scientific facts rooted in a decade of study about the nature of wolves and dogs. As concepts of the canine go, Franklin's is notably audacious. And among a plethora of books on breeding, disciplining, loving and lamenting the loss of man's best friend, this thoughtful discourse is a best of breed. (Sept.)

For the love of a dog: understanding emotion in you and your best friendMcConnell, Patricia B.

A dog's history of the world: canines and the domestication of humansHobgood-Oster, Laura, 1964-

Dog is love: why and how your dog loves youWynne, Clive D. L.

Our dogs, ourselves: the story of a singular bondHorowitz, Alexandra

Canine confidential: why dogs do what they doBekoff, Marc

The animals among us: how pets make us humanBradshaw, John, 1950-

Dogs that know when their owners are coming home: and other unexplained powers of animalsSheldrake, Rupert

What's a dog for?: the surprising history, science, philosophy, and politics of man's best friendHomans, John

Pack of two: the intricate bond between people and dogsKnapp, Caroline, 1959-2002