Pitching my tent : on marriage, motherhood, friendship, and other leaps of faith / Anita Diamant. 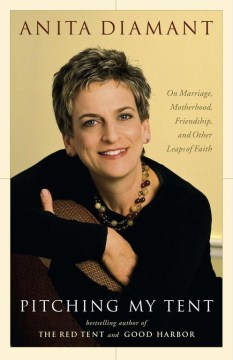 Diamant has achieved fame worldwide as the author of The Red Tent (1997), but this collection brings together essays that first saw life as newspaper and magazine columns and were written primarily before her megabook. She has revised and updated most of the pieces and links them together as seasons of life--love and marriage, motherhood, middle age, death--offering ruminations along the way about life's precious milestones, including holidays, retirement, and the moment when a child leaves home. Diamant also writes about her husband, a lapsed Presbyterian who converted to Judaism and helped her find a more meaningful faith, and her daughter and what it meant to her sense of self to become a mother. She talks about her first retreat and how she wants to retire to a commune with other aged hippies. And always there is her religion, which centers her, sustains her, and marks the passage of time. The essays, some quite short, have the feel of Anna Quindlen's later work but with a Jewish flavor, of course. Yet the topics and feelings Diamant writes about are so universal that putting a religious label on them does them an injustice. Comforting and thought provoking but never saccharine. ((Reviewed August 2003)) Copyright 2003 Booklist Reviews

Before The Red Tent, Diamant was a columnist-as evidenced by two decades' worth of work republished here. With a six-city author tour. Copyright 2003 Reed Business Information.

Before Diamant's best-selling novel The Red Tent and her six collections on contemporary Jewish life, she was a columnist for the Boston Globe. Her job was "to report on the events of the day and changes under [her] own roof," with the goal of using her experiences to reflect trends. In writing about topics as seemingly diverse as friendships, marriage, birth, death, her dog, electoral politics, abortion, lingerie, situation comedies, God, and country, Diamant connected with her audience by tapping into the zeitgeist. Organized into six parts, this memoir includes sections on love and marriage, mother and child, friendships, the challenges of balancing a secular and religious calendar, midlife, and what it means to embrace Judaism. Because Diamant (like her readers) was "reinventing the female psyche and soul," the essays she has included here are deeply personal and, admittedly, "a sort of diary." The result is a humorous, honest, and friendly collection impossible not to love. Highly recommended for all public libraries. [Previewed in Prepub Alert, LJ 6/1/03.]-Pam Kingsbury, Florence, AL Copyright 2003 Reed Business Information.

This collection of short essays, culled primarily from the Boston Globe Sunday Magazine and then reworked, offers a taste of nonfiction from the author of the novels The Red Tent and Good Harbor. Diamant describes these selections, organized around such themes as love and marriage, child rearing, friendship and living a religious life, as "a sort of diary." Some pieces ring with poignancy, such as Diamant's memorial to her friend David. "I wish," she writes after she leaves the cemetery before David's casket is lowered, "I had stayed to see the workmen come with their truckload of soil that would tuck him in the earth. I would have added my flower to that blanket, burying him just a little." Other selections are less appealing, such as the one on witnessing a four-alarm fire and another on teachers and sexual harassment. The book's strength lies in its woman-to-woman conversational tone, especially in the opening section about married life and its dark side. "In my more rational moments," Diamant writes, "I understand that nagging is not only unattractive but also a total waste of energy. Jim [Diamant's husband] is never going to (a) clear out his piles of magazines, (b) pinch pennies, or (c) give his lungs and heart a break from nicotine just because of anything I say." Diamant's fans will relish "Midrash-or Not," which answers the question of whether The Red Tent is really Bible commentary. Taken together, these morsels will make a tasty snack for Diamant's admirers. Agent, Amanda Urban. (Oct. 2) Forecast: The staggering success of Diamant's previous works and a jacket photo of the author looking casual and approachable will attract female browsers, although it's unlikely this will approach Tent-like success. Copyright 2003 Reed Business Information.