The haunting of America : from the Salem witch trials to Harry Houdini / William J. Birnes and Joel Martin ; foreword by George Noory. 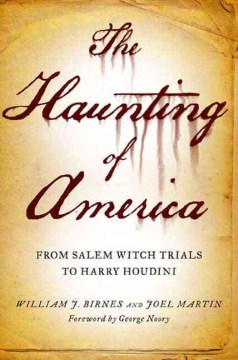 As in The Haunting of the Presidents (2003), Birnes and Martin assess American history as it has been affected by the occult and movers and shakers who openly embraced spiritualism. Proceeding episodically, they identify and discourse on high points in what they contend is the entrenched history of paranormal influence on our national life. Particularly interesting is their consideration of levitation as demonstrated by Daniel Dunglas Home, "who became the most famous and enigmatic physical medium of his time." Sir Arthur Conan Doyle, among other contemporary notables, attested to Home's ability to perform levitation as well as to his proficiency as a medium. In fact, Home's feats were remarkably well attested by witnesses, and in 1871 skeptical physicist Sir William Crookes found, much to other Victorian skeptics' disappointment, that Hume manifested an "unknown force" that could be scientifically detected. Also considered are the long-standing rivalry between debunker Harry Houdini and Conan Doyle, in his dotage a famously naive believer in the supernatural, and a surfeit of other kooky people and occurrences. Great bedtime reading. Copyright 2009 Booklist Reviews.

Following The Haunting of the Presidents, Birnes (The Day After Roswell), star of the History Channel's UFO Hunters, and Martin present this new title, which the jacket copy proclaims to be "the only book to tell the story of how paranormal events influenced the United States." It certainly is not, though it might be the first one with a 50-page introduction discussing such topics as Sumerian astronomy, Egyptian pyramids, and magic and divination in the Bible. The authors begin the U.S. section with an overly simplistic analysis of the Salem witch trials, stating that they're rooted in Calvinism (why similar trials occurred in Europe among other Protestant sects and Catholics is never addressed); they then proceed to discuss Spiritualism, psychic research, and paranormal events. The authors use primary sources at times, as well as secondary sources, encyclopedias, and less-reputable texts (e.g., Zechariah Sitchin, who believes humanity was founded by aliens). In some cases, they gloss over historical difficulties with their source material yet criticize other scholars for bias. VERDICT Excellent books—e.g., Mitch Horowitz's Occult America and Herbert Leventhal'sscholarly In the Shadow of the Enlightenment—are better purchases.—Dan Harms, SUNY Cortland Memorial Lib.

Birnes (The Day After Roswell), star of the History Channel's UFO Hunters, and veteran paranormal expert Martin chronicle a wide variety of what they view as occult and mystical experiences in a comprehensive account that spans centuries, from colonial times to 9/11. There may well have been black magic practice in Salem, they speculate, and recount George Washington's purported prophetic vision at Valley Forge, strange sightings of Washington's apparition at Gettysburg and elsewhere, the Bell Witch of Tennessee and Lincoln's precognitive dreams, while introducing such key figures as the charismatic Franz Mesmer and Margaret Fox, whose controversial spirit rappings prompted the surge of 19th-century spiritualism, even after her later revelation that she was just cracking "the joint of her big toe." Covering chicanery and conjurers, demons and guardian angels, skeptics and believers and a woman who's convinced her recurring dreams prefigured 9/11, Birnes and Martin have produced an informative and entertaining overview that will leave fans of the occult eager for future collaborations by these authors. (Sept.)