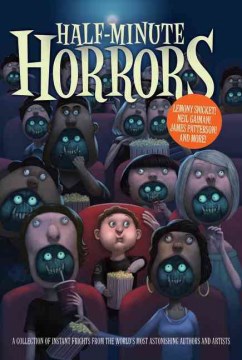 A volume full of mostly one- or two-page horror stories from over 70 authors—it may sound like a gimmick, but it plays like the worst night of sleep you've ever had. Horror is the genre most suited for this stab-and-run format, and the authors seem to revel in the campfire-story quickness. At least four monster-in-my-bedroom tales exploit fears that will cut all too close to the target audience, and several babysitting-gone-wrong stories should not—repeat: not—be read while babysitting. The best are true examplars of narrative economy: Sarah Weeks' One of a Kind has the gut punch of a good urban legend; Daniel Ehrenhaft's The Rash is as gruesome as it sounds; and Chris Raschka's On a Tuesday during That Time of Year has no apparent point but to upset the reader—well done! Heavyweights Lemony Snicket, Neil Gaiman, M. T. Anderson, and more weigh in, but it's Arthur Slade's one-paragraph cautionary tale What's Coming that will haunt the most nightmares. The scattered art-based stories hit a few awkward notes, but this one's a creepy keeper. Copyright 2009 Booklist Reviews.

Each of these stories takes less than thirty seconds to read. The micro-narratives are eerie, grotesque, or darkly funny. Authors include Neil Gaiman, Sonya Sones, Jon Scieszka, and Margaret Atwood, using forms such as prose, single drawings, illustrated stories, and verse. The most cleverly constructed tales manage to delay their effects until a few seconds after you've finished reading. Ind. Copyright 2010 Horn Book Guide Reviews.

It's a party game: write a scary story that will take less than thirty seconds to read. With a party of seventy-five that includes such guests as Neil Gaiman, Sonya Sones, Jon Scieszka, and Margaret Atwood, the results are bound to be pretty good. This is not the stuff of cozy campfires but a collection of micro-narratives that are eerie, grotesque, gnomic (Joyce Carol Oates is particularly inscrutable), or darkly funny. Participants worked in prose, strip cartoon, single drawing, illustrated story, and a variety of verse forms from pantoum to "horrorku." A subject index reminds us of the trappings of horror -- basements; beasts; blood; and beds, under and around. The most cleverly constructed stories manage to delay their effects until a few seconds after you've finished reading. Jon Klassen's "The Legend of Alexandra & Rose," a one-page drawing with labels, has this delicious aftershock effect. What any reader finds truly scary is a kind of Rorschach test, but do not read M. T. Anderson's babysitter story if you ever intend to eat lasagna again. Copyright 2010 Horn Book Magazine Reviews.

Featuring a who's who of authors and artists (Margaret Atwood, Avi, Neil Gaiman, Jonathan Lethem, Lauren Myracle, James Patterson, Brian Selznick and many more), this collection of more than 70 chilling snippets is ideal for campfires and car trips. The stories—some a couple sentences, some a few pages—range from darkly humorous (Jerry Spinelli's murderous twist on the age-old "chicken or egg" question) to outright creepy (Josh Greenhut and Brett Helquist's illustrated story about terrifying revelations from a Ouija board). These are inherently quick reads, but with enough plot and detail to encourage further imagining. Ages 10–up. (Sept.)