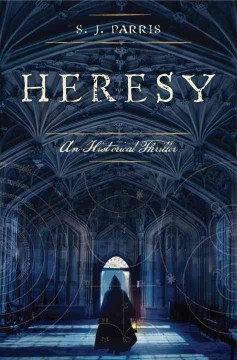 Copernican philosopher Giordano Bruno, exiled from his native Italy during the Inquisition, travels to England, where he's recruited to spy for Queen Elizabeth I. Under the cover of participating in an Oxford debate, Bruno infiltrates the inner circles of academia and unknowingly sets off a series of murders mimicking ancient martyrs' deaths, which he then tries to solve. Important background information (how and why the queen recruited him or why the college would let Bruno investigate murders on campus) is omitted, while the setting is described in lavish detail and the conversations between characters sometimes seem interminable. The reader's interest flags not only from the sluggish pacing but also from the sameness of the characters, including the lackluster hero, who can't decide if he's a philosopher or a spy. Ultimately, we're left with a promising premise but not much else. Readers devoted to the historical period will find the novel mildly satisfying, but better choices include Ariana Franklin's Mistress of the Art of Death (2007), Iain Pears' An Instance of the Fingerpost (1998),and even Dorothy Sayers' classic Gaudy Night (1935). Copyright 2009 Booklist Reviews.

Readers first meet Dominican monk Giordano Bruno as he examines a prohibited text in the monastery privy. Discontented with the Church's teachings, Bruno is a believer of Copernicus's heliocentric theory of the universe. After escaping the Inquisition, he spends years on the run, offering his services as a teacher and ever on the lookout for Hermes Trismegistus's divine Egyptian text. To be Catholic in 1583 England is synonymous with sedition, and an odd twist of fate sees Bruno employed by Queen Elizabeth. His cover: to participate in a debate at Oxford; his purpose: to ferret out heresy at the university. What Bruno finds is a lovely young woman, a group of secretive Fellows, and a series of brutal murders. VERDICT Parris's debut historical thriller shines a light on the religious turmoil of 16th-century England, when men swore an oath to one faith but practiced another. Narrator Bruno (based on the real-life philosopher) is lively and sympathetic, and dedicated readers will be wholly satisfied in the end. Recommended for fans of historical thrillers along the lines of Katherine Neville's The Eight and Matthew Pearl's The Dante Club. [See Prepub Alert, LJ 10/1/09; also available as an abridged audio CD, abridged audiobook download, unabridged audiobook download, and an ebook.—Ed.]—Jamie Kallio, Thomas Ford Memorial Lib., Western Springs, IL

Historical suspense starring, yes, monk/scientist Giordano Bruno. Hoping to avoid being burned at the stake for proclaiming that Earth orbits the sun, he's fled Italy for Oxford University, where he ends up working undercover for Queen Elizabeth I. Fits right into current thriller trends; with a reading group guide. Copyright 2009 Reed Business Information.

Set in 1583 against a backdrop of religious-political intrigue and barbaric judicial reprisals, Parris's compelling debut centers on real-life Giordano Bruno, a former Italian monk excommunicated by the Roman Catholic church and hunted across Europe by the Inquisition for his belief in a heliocentric infinite universe. Befriended by the charismatic English courtier and soldier Sir Philip Sidney, the ambitious Bruno flees to more tolerant Protestant England, where Elizabeth I's secretary of state, Sir Francis Walsingham, recruits him to spy, under the cover of philosophical disputation, on secretly Catholic Oxford scholars suspected of plotting treason. As one Oxford fellow after another falls to gruesome homicide, Bruno struggles to unravel Oxford's "tangled loyalties." Parris (the pseudonym of British journalist Stephanie Merritt) interweaves historical fact with psychological insight as Bruno, a humanist dangerously ahead of his time, begins his quest to light the fire of enlightenment in Europe. (Feb.)

A prisoner in MaltaDepoy, Phillip

The spy of VeniceBrandreth, Benet