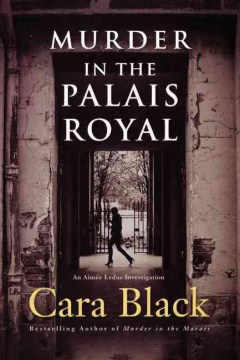 How many high heels has investigator Aimeé Leduc broken while crashing around the arrondisements of Paris, trying to solve murders she has no business investigating? Call it one heel per novel at least. In the opening scene of this tenth installment in the series, Aimeé's business partner, René, is shot, and shortly thereafter, Aimeé discovers an unexplained deposit in their computer-security company's bank account, which puts the government on her tail, suspecting tax fraud. The plot thickens quickly, as it always does in this frenetically paced series, when it becomes clear that Aimeé is being framed as René's killer. Finally, one of Aimeé's personally motivated criminal investigations doesn't conflict with her business—in fact, it's essential to saving the company. Keeping one step ahead of the police, Aimeé follows the trail to Paris' glorious Palais Royal, where she breaks both the inevitable heel and, eventually, the case. Yes, this series is thoroughly formulaic, but who cares when the formula is such fun and when the heroine is, well, such a delightfully unbuttoned Audrey Hepburn for the twenty-first century? Copyright 2010 Booklist Reviews.

In Aimée Leduc's latest investigation (after Murder in the Latin Quarter), the crime is upfront and personal—not only has Aimée's partner, René Friant, been shot but Aimée herself is accused of the crime. In addition, a large amount of money has mysteriously appeared in Leduc Detective's account, prompting official investigation, and a young man Aimée helped pack off to jail for anti-immigrant activities demands to see her—and then ends up an apparent suicide. Bien sûr, this would not be an Aimée Leduc novel without political concerns, and Aimée's follow-up of the convicted man's death—even as she tries to clear her name and figure out who really shot René—leads her straight into the hate-filled terrain of neo-Nazi agitation and Les Blancs Nationaux. These two investigations link in a surprising way—there's a really ripping ending—and make for interestingly different and overlapping tension. And with Aimée really on the defensive, she's more appealingly tough yet vulnerable than ever. VERDICT With its multiple strands, this work has a somewhat different feel from other Aimée Leduc novels. But never fear, it's still a winner. [See Prepub Mystery, LJ 11/1/09.]—Barbara Hoffert, Library Journal

Aimee Leduc is accused of shooting her partner, the tax authorities take an interest in her firm's finances, and an impersonator is on the loose. Murders follow. The tenth in the best-selling series from Black, who lives in San Francisco. Regional tour. Copyright 2009 Reed Business Information.

Before Aime Leduc can go to New York to meet a previously unknown brother at the start of Black's solid, if less than suspenseful, 10th mystery to feature the Paris PI (after 2009's Murder in the Latin Quarter), dogged Inspector Melac arrests her for the nonfatal shooting of her partner, Ren Friant. A woman impersonating the stylish PI entered the Leduc Detective office and shot Ren with a Beretta. Someone, Aime decides, is trying to frame her. Improbably, Aime gains her release by pulling strings with her godfather, Commissaire Morbier, so she can investigate on her own. The trail leads her to Cardinal Richelieu's former Palais Royal, where bistro waitress Clmence Touvier schemes to blackmail the prominent mother of a neo-Nazi arsonist whose accomplices Aime helped convict. Clmence's strangulation in the Palais arcades ups the ante. In the end, Aime must confront dark revelations about her fugitive mother, who may have a part in the sinister plot against her. (Mar.)