Finnikin of the rock / Melina Marchetta. 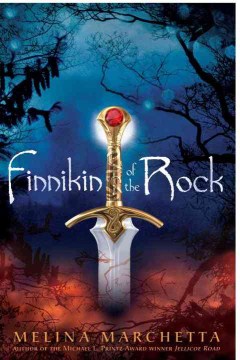 *Starred Review* In her latest title, Marchetta, author of the 2009 Michael L. Printz Award winner, Jellicoe Road, steps deftly into the fantasy genre. Ten years before the story's start, assassins crept into the kingdom of Lumatere and murdered the royal family, with the possible exception of Balthazar, heir to the throne. As rumors circulated that Balthazar survived, a mystic cast a curse that created a magical barrier around the kingdom and prevented thousands who had fled from returning. Marchetta focuses her tale on 19-year-old Finnikin, the son of a former royal guard, who is serving in exile as an apprentice to Sir Topher, a former advisor to the murdered king. While aiding refugees, they meet a young novice who can enter others' dreams and claims that Balthazar has chosen Finnikin to "take his people home." As Finnikin gathers forces to return to the kingdom, intrigue and double-dealing ensue. The skillful world building includes just enough detail to create a vivid sense of place, and Marchetta maintains suspense with unexpected story arcs. It is the achingly real characters, though, and the relationships that emerge through the captivating dialogue that drive the story. Filled with questions about the impact of exile and the human need to belong, this standout fantasy quickly reveals that its real magic lies in its accomplished writing. Copyright 2010 Booklist Reviews.

In the years since his homeland was taken by brutal enemies, Finnikin has trained in combat and diplomacy. A strange message brings him to a prophetic young woman named Evanjalin, who propels him on a journey fraught with danger but leading resolutely toward home. This sweeping fantasy's setting is a fully realized medieval-type world of bloody battles and dark mysticism. Copyright 2010 Horn Book Guide Reviews.

A kingdom stolen and ravaged, a dark curse, a blood oath, and fierce love drive this sweeping fantasy set in an imagined feudal land. Since Lumatere was taken over by brutal enemies who slaughtered the royal family, Finnikin has wandered for ten years with his mentor, the king's First Man, training in combat and diplomacy to prepare for a new Lumatere. An impenetrable black mist shrouds the kingdom, preventing their return, so Finnikin and Sir Topher seek a new land for the suffering Lumateran exiles. Then a strange message brings them to a cliff-top temple and a young novice, Evanjalin, who propels them on a journey fraught with danger but resolutely toward home. Revealing bits of her prophetic visions (but withholding other parts), Evanjalin both fascinates and infuriates Finnikin -- a sure sign of romance -- and readers will guess that she is more than a simple novice. Finnikin is a dashing hero (handsome, intelligent, a brilliant swordsman, and "no stranger to women"), but the mysterious Evanjalin is the stronger leader; their fateful love is entwined with the fate of the kingdom. A fully realized medieval world of bloody battles and dark mysticism, the fantasy is a clear allegory for the real-world atrocities of war, addressing sickness, hunger, violence, even rape. Swagger and swordplay among the men and tender moments between the young lovers lighten their hardships and hint at a hopeful ending. Copyright 2010 Horn Book Magazine Reviews.

In her first fantasy work, Printz Award–winner Marchetta (Jellicoe Road) spins a sprawling yet intimate tale about a doomed kingdom and its struggle for reclamation. Years ago, Lumatere's royal family was brutally murdered, an imposter king placed on the throne, and a curse levied on the land, forever locking it away from the rest of the land of Skuldenore, with many of its inhabitants cast out to the winds. Finnikin has spent the decade after Lumatere's fall traveling, collecting stories of his scattered people and trying to ease their plight. Then he and his mentor are called to safeguard Evanjalin, an enigmatic young woman who claims to know the location of Lumatere's long-missing heir, who can break the curse and bring the exiles home. As Finnikin and Evanjalin seek to reunite Lumatere's far-flung people and restore their land, they face betrayals, horrors, and ethical crises. Magic, romance, intrigue, and adventure all play their parts as this dense, intricate epic unfolds, and flawed, memorable heroes fight for their kingdom's redemption. Ages 14–up. (Feb.)

An ember in the ashesTahir, Sabaa

A conspiracy of kingsTurner, Megan Whalen

The girl of fire and thornsCarson, Rae