Love songs from a shallow grave : a Dr. Siri investigation set in Laos / by Colin Cotterill. 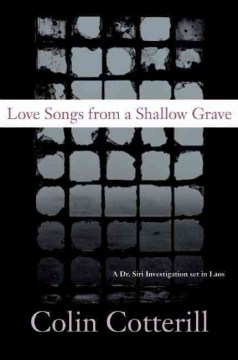 Cotterill's mordant mystery series set in 1970s Southeast Asia features septuagenarian Siri Paiboun, national coroner of the People's Democratic Republic of Laos. In this dark seventh entry, Dr. Paiboun investigates the deaths of three Laotian women who have died of fencing wounds. The killer, the doctor presumes, must be someone proficient with an épée, a rarity in his country, to be sure. Connections are found between the women—all pursued advanced studies in Eastern bloc countries—but that link doesn't bring Paiboun much closer to solving the crimes. The offer of an all-expenses paid junket to Cambodia puts a fire under Paiboun, and he hastily cracks the case (or so he thinks). Despite a reputation for consorting with the spirit world, Paiboun ignores otherworldly warnings not to go to Cambodia. Now it's too late; he's a prisoner of the Khmer Rouge. Cotterill interweaves details of Paiboun's investigation with an account of the doctor's ghastly incarceration. Though his trademark levity lifts the tale, it's still pretty grim stuff, but Cotterill's many fans know that, in this series, wit comes at a price. Copyright 2010 Booklist Reviews.

In 1978 Laos, three young women are murdered within a few days of each other. Their bodies are found with a fencing sword thrust through their hearts. Dr. Siri and the police begin to investigate, but as an arrest is made, Siri disappears in Cambodia while on a diplomatic mission. VERDICT In his seventh installment (after The Merry Misogynist) Cotterill vividly depicts a Southeast Asia still traumatized by the Vietnam War—the horrors perpetrated by the Khmer Rouge, the shocking poverty, the rampant corruption, and the steadfast spirit of the people, And Dr. Siri is a one-of-a-kind protagonist rivaled only by Eliot Pattison's Shan Tao Yung. Highly recommended for series fans and readers who enjoy international mysteries. [See Prepub Mystery, LJ 4/1/10.]

Set in 1978, Cotterill's superb seventh mystery to feature Dr. Siri Paiboun (after 2009's The Merry Misogynist) finds "the national and only coroner of the People's Democratic Republic of Laos" nearing his 74th birthday chained to a lead pipe in a Cambodian prison. Siri's captivity is wrapped around investigating the puzzling deaths of three Laotian women, each skewered by dueling swords that are a decided rarity in Laos. A strong supporting cast, including Siri's recently acquired wife, Madame Daeng, and morgue colleague Nurse Dtui, who's married to Inspector Phosy, enriches the narrative. The unfathomable violence of the Khmer Rouge reign emerges during Siri's unexpected ordeal and forms a vivid contrast to his humanity in seeking to protect the murder suspect in the three sword deaths. This immensely satisfying mystery has it all--a heroic protagonist, a challenging puzzle, and an exotic setting. (Aug.)