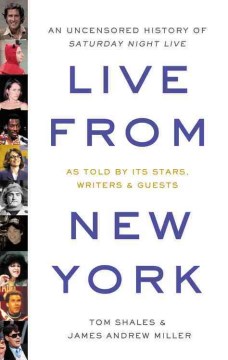 Cultural icon Saturday Night Live seems to get almost as much attention for its anniversaries and retrospectives as it does for its current shows. It has also been the subject of several books. But even those who think they have heard all the stories will be impressed by the work Shales and Miller have done to pull together this oral history that covers the last 27 years of laughs and groans. Actors, writers, producers, staff, guest hosts--all weigh in to give readers an in-depth, revealing portrait with a you-are-there quality. There's also more dirt here than there are stars in the SNL firmament: the rivalries, the fights, and the romances, although that may be too, well, romantic a word. Founding (and current) producer Lorne Michaels comes across as a particularly fascinating character, a father figure to some, a preening enigma to others; the final chapter, which is entirely devoted to what people think of him, doesn't seem nearly enough. Eddie Murphy refused to cooperate with the authors, and it would have been fun to hear from some of the show's lesser lights, but like the proverbial box of chocolates, this is full of tasty tidbits and hard to put down. ((Reviewed October 1, 2002)) Copyright 2002 Booklist Reviews

Finally ready for prime time? Two Pulitzer Prize-winning journalists give us the story behind the show. Copyright 2002 Cahners Business Information.

The story of Saturday Night Live (SNL) is well known-its unique blend of live comedy and popular music broke the mold of network programming when it began in 1975. Yet this history of the program isn't repetitive. Shales, a TV critic at the Washington Post, and Miller (Running in Place) interviewed SNL's former and current cast members, writers, musical guests, and other associates and compiled their quotes to forge an illuminating oral account that offers a unique perspective on the inner workings of the show and its stars' many interactions. The book is organized into eras, which allows readers to skip around, as does an index of cast members by season (though a list of writers associated with each season is missing). Written with the cooperation of longtime producer Lorne Michaels, this is highly recommended for all public and academic libraries.-David M. Lisa, Wayne P.L., NJ Copyright 2002 Cahners Business Information.

This oral history of NBC's Saturday Night Live is the juiciest treasure trove of backstage gossip, sex and drugs since The Andy Warhol Diaries. With almost three decades' worth of memories from cast members, celebrity hosts, writers, crew and network execs, readers get first-hand reports (often contradictory) on the volatile, competitive, grueling and often drug-fueled process of creating a weekly, 90-minute, live comedy show. While the cast and writers changed over the decades there were two constants: the universal loathing of guest host Chevy Chase and the power of producer Lorne Michaels ("I think he picked the right profession," assesses Jane Curtin, "because he gets to lord over people who want to kneel at his feet and he doesn't acknowledge them-which makes them work harder."). Regulars like Dan Aykroyd, Adam Sandler, Chris Rock, Mike Myers, Billy Crystal, Bill Murray, Al Franken, Martin Short as well as guest hosts like Tom Hanks, Penny Marshall, Alec Baldwin, Carrie Fisher, Lily Tomlin and Steve Martin contribute sterling anecdotes that are alternately hilarious, touching, upbeat and scathing. With the exception of Eddie Murphy (who's positively portrayed), virtually the only missing voices are of those who have passed away (the editors use only interviews conducted for the book and not vintage interviews with John Belushi, Gilda Radner, Phil Hartman or Chris Farley). Scandals, infighting and plenty of showbiz dirt make this a guilty-pleasure page-turner from start to finish. Photos not seen by PW. Agent, Sloan Harris. (Oct. 7) Forecast: Little, Brown editor Geoff Shandler got the buzz going on this book at Book Expo in May, and a first serial in this month's issue of Vanity Fair has heightened the buzz to a roar. Ubiquitous media coverage and rave reviews should rocket this one onto bestseller lists. Copyright 2002 Cahners Business Information.

Homey don't play that!: the story of In living color and the black comedy revolutionPeisner, David

Seinfeldia: how a show about nothing changed everythingArmstrong, Jennifer Keishin

The Chris Farley show: a biography in three actsFarley, Tom, 1961-

Gasping for airtime: two years in the trenches of Saturday Night LiveMohr, Jay

The Daily Show (the book): an oral history as told by Jon Stewart, the correspondents, staff and guestsSmith, Chris

Ladies who punch: the explosive inside story of 'The view'Setoodeh, Ramin