The troubled man / by Henning Mankell ; translated by Laurie Thompson. 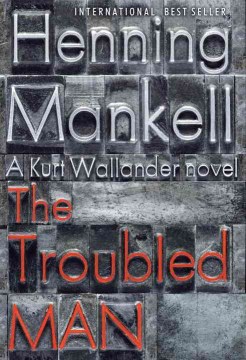 *Starred Review* Readers whose knowledge of Scandinavian crime fiction goes beyond Stieg Larsson know that it was Henning Mankell who jump-started what has developed into a 20-year golden age. Mankell's latest novel, the final volume in his Kurt Wallander series, represents a landmark moment in the genre comparable to the swan songs of Ian Rankin's John Rebus (Exit Music, 2008) and John Harvey's Charlie Resnick (Cold in Hand, 2008). We pick up Wallander's story with the aging inspector feeling his 60-plus years and suffering from memory problems that lead to his suspension from the Ystad police force. With time on his hands, Wallander throws himself into solving the disappearance of his daughter's father-in-law, a former Swedish submarine commander obsessed with an incident from the 1980s involving the detection of Soviet submarines in Swedish waters. Wallander's digging into the commander's life leads toward what appears to be a cold war scandal that could rock the current government. As Wallander strives to determine if the commander's public persona bears any relation to his private self, he launches another, more poignant investigation into his own past. Has he always been the man he feels he has become—"filled with self-pity, a thoroughly pathetic figure"—or does his past tell a different story? This is a deeply melancholy novel, at times painful to read, but Mankell, sweeping gracefully between reflections on international politics and meditations on the inevitable arc of human life, never lets his story become engulfed by darkness. Always a reticent man, Wallander shows an intensity of emotion here, a last gasp of felt life, that is both moving and oddly inspiring. An unforgettable series finale. HIGH-DEMAND BACKSTORY: The swan song of a much-loved series is always a big event, and thanks to the PBS series based on the Wallander novels, this one has some extra frisson. Expect off-the-book-page coverage on NPR and major print outlets as well as a widespread online advertising campaign. Copyright 2011 Booklist Reviews.

After his stand-alone historical Daniel, Mankell returns to his beloved detective Kurt Wallander in this tenth and possibly final installment of the best-selling series. Wallander delights in the birth of his first grandchild and enjoys the company of his daughter, Linda, but struggles with his role as an older and increasingly forgetful investigator for the Ystad Police. When the parents of Linda's partner go missing, Wallander finds himself deep in a decades-old mystery involving foreign spies, submarines, and Cold War politics. He strives to understand the complexities of the case while also dealing with the loneliness of old age, the sadness of friends' passing, and an alarming tendency to forget where he is and what he's doing. VERDICT Wallander might be aging, but Mankell is dead on in crafting an intricate plotline equal to the skills and insight of his famous detective. This is essential for fans of the series, and it succeeds as a stand-alone in the crowded field of dark, psychological Scandinavian thrillers. [150,000-copy first printing; see Prepub Alert, LJ 10/1/10.]—Catherine Lantz, Morton Coll. Lib., Cicero, IL

In Mankell's masterful 11th novel featuring Kurt Wallander (and likely the last in this internationally bestselling series, according to Sonny Mehta's note to the reader), the 60-year-old Swedish detective unofficially pursues a baffling case that's part mystery, part spy thriller. At the 75th birthday party for Håkan von Enke (the "troubled man" of the title), von Enke, a retired Swedish naval commander, tells Wallander about a 1980 incident involving an unidentified submarine that "invaded Swedish territorial waters." Von Enke was about to fire depth charges to bring the sub to the surface when higher-ups ordered him to abort. A few days after von Enke confides in the detective, he disappears; shortly after, his wife goes missing as well. As Wallander's quest for the truth leads him back to the era of cold war espionage, Mankell (Firewall) deftly interweaves the problems of Swedish society with the personal challenges of one man trying to understand what happened and why. 150,000 first printing; 5-city author tour. (Mar.)

In the electric mist with Confederate deadBurke, James Lee, 1936-