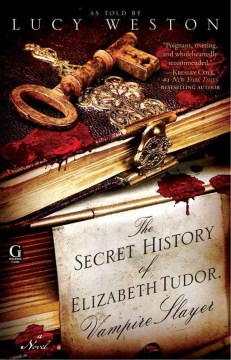 Weston's debut novel purports to be the secret diaries of Elizabeth Tudor, Britain's sixteenth-century Virgin Queen. Centering the story on the tumultuous few weeks surrounding Elizabeth's coronation in January 1559, Weston quickly reveals that Elizabeth is far more than Queen of England; she's also a descendant of Morgaine Le Fay (through Anne Boleyn) and is fated to battle for the future of England against its ancient enemy, Mordred, son of Arthur, and a vampire. The flowery, Renaissance-era language lends some verisimilitude to the text, while the first-person narration establishes the character of this very different Elizabeth. The short time frame gives the story focus, and repeated encounters between Elizabeth and Mordred heighten the drama. Devotees of the Tudor Queen may be put off by the vampire-slayer gambit, but if they give Weston's alternate history a chance, they may find it intriguing, especially the explanation offered for Elizabeth's refusal to marry. Suggest to readers who enjoyed Kostova's The Historian (2005) but could do with something faster paced. Copyright 2011 Booklist Reviews.

In recent years, we've seen famous literary and historical characters jump on the monster-killing bandwagon. Elizabeth Bennet stomps zombies, and Abe Lincoln spears vampires—apparently when not tending to affairs of state. The latest entry in this subgenre of urban fantasy/paranormal romance/historical fiction is none other than Elizabeth Tudor, the Virgin Queen. Author Weston (yes, that Lucy from Bram Stoker's Dracula) crafts an amusing yarn about the queen's destiny aside from ruling England. Borrowing from Arthurian legend, British history, and Buffy the Vampire Slayer, the novel is told in alternating chapters by Elizabeth and her supernatural enemy, Mordred, the vampire son of King Arthur. No previous knowledge of the Tudors is needed; Weston name checks important historical figures like Elizabeth's adviser William Cecil, and important events are mentioned, along with approximate dates. While it's obvious that this is all fiction, there's just enough weight behind Elizabeth's memories of her mother, Anne Boleyn, and her father, Henry VIII. VERDICT This fun fictional account of the famed monarch will please fans of Seth Grahame-Smith or those in search of a paranormal Alison Weir.—Stacey Rottiers Comfort, Dexter Dist. Lib., MI

A highly palatable fusion of dark fantasy, historical fiction, and Arthurian legend, this first installment of an audacious new mashup series features Queen Elizabeth as Britain's only hope to defeat an "ancient foe" threatening to overwhelm the land. The narrative, presented as a recently unearthed secret diary, begins when an encounter with Anne Boleyn's ghost awakens Elizabeth's latent supernatural powers. With powerful enemies watching her every move, the young queen is informed of an even more pressing concern: Mordred, a thousand-year-old vampire--who happens to be the bastard son of King Arthur--wants to turn Elizabeth into one of the undead and rule England by her side. Powered by exceptional character development, a meticulously detailed portrayal of 1559 London, and brisk pacing, this utterly readable novel will more than satisfy fans of fantasy and historical fiction alike. (Jan.)

The marriage game: a novel of Queen Elizabeth IWeir, Alison, 1951-

All the queen's playersFeather, Jane