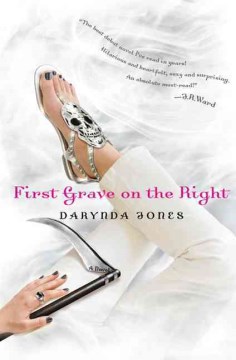 *Starred Review* Charley Davidson's police-officer father and uncle began consulting her for help in solving murders when she was five years old. Charley has a special gift—she sees and talks to the victims. Her job is to point the recently departed to the light, but those who have been murdered want her to make sure their killers are caught. Charley's latest clients-from-beyondare three personable lawyers, all murdered by the same person at nearly the same time. When she's not helping ghosts with the ultimate closure, Charley is trying to figure out who her sizzling-hot dream lover is. The manuscript for this sassy, sarcastic, sexy novel won the Romance Writers of America's Golden Heart for Best Paranormal Romance. Now Jones' wickedly witty debut will delight aficionados of such humorous paranormals as Casey Daniels' Pepper Martin Mysteries (Don of the Dead, 2006; The Chick and the Dead, 2007; Tombs of Endearment, 2007) and Dakota Cassidy's Accidental Friends series (The Accidental Werewolf, 2008; Accidentally Dead, 2008; The Accidental Human, 2009). Librarians will want to be on the lookout for the next book in Jones' series, Second Grave on the Left (2011). Copyright 2011 Booklist Reviews.

Charley Davidson is a private investigator from a family of cops. She also has an unusual part-time job as a grim reaper. Those who die and have unfinished business on Earth seek her out for assistance. When the issue is resolved, she helps them go to the light. But lately she is having a different kind of heavenly experience: very naughty dreams of a powerful, dark, totally hot, supernatural guy. How is he getting into her head? While investigating a triple homicide at the request of those killed, she discovers that her soul mate and nocturnal lover is the son of Satan—which, as he points out, is equivalent to Charley's being the stepdaughter of Denise, who is entirely human but evil. VERDICT The author's sarcastic sense of humor is at first annoying but grows on the reader as the story progresses. Jones skillfully establishes the novel's setting and keeps up the pace with plenty of action. And let's be honest—the sex is pretty hot, too. Fans of Sherrilyn Kenyon and other authors of paranormal romance will love this series debut. [See Prepub Alert, LJ 9/15/10; library marketing; the manuscript of this novel earned the author the 2009 Golden Heart for Best Paranormal Romance.—Ed.]—Jennifer Draper, Pickering P.L., Ont.

The grim reaper gets a shiny cool makeover in Jones's blazing hot debut, a paranormal romantic thriller. Charlotte Jean "Charley" Davidson, a 27-year-old PI and consultant for the Albuquerque, N.Mex., police department, exists on two planes—one for the dead, the other for the living. As the grim reaper, she escorts the recently departed "into the light." In her dreams, she's haunted by a "dark, seductive stranger," whose warmth suggests he's something "not dead." In the real world, Charley helps her APD detective uncle, Bob Davidson, investigate the fatal shootings of three lawyers who were representing a client accused of murder. Meanwhile, Charley finds herself oddly attracted to the devilishly handsome Reyes Farrow, a convicted criminal in a coma. Fast-talking Charley's wicked exuberance and lust for life will appeal to fans of MaryJanice Davidson and Janet Evanovich and maybe fill a hole for those mourning the recently canceled Ghost Whisperer. (Feb.)

One for the moneyEvanovich, Janet
The voodoo killings: a Kincaid Strange novelCharish, Kristi

You slay me: an Aisling Grey, Guardian, novelMacAlister, Katie