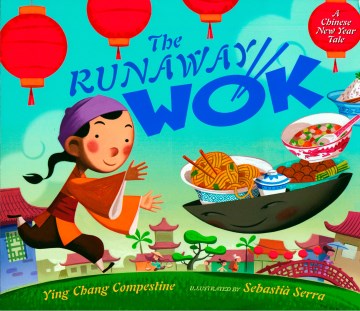 In this high-spirited original folktale set in yesteryear Beijing, a magical pan becomes a Robin Hood hero. On Chinese New Year's Eve, the poor Zhangs send their son, Ming, to trade their last eggs for rice, which, unlike the rich, greedy Li family, they plan to share with their neighbors. Along the way, Ming encounters an old man, who offers Ming a wok that miraculously pleads its own case: "Trade for me, / I am more than what you see!" Astonished, Ming carries it home, where it continues to sing: "Skippity-hoppity-ho! / To the rich man's wife I go!" Off it bounces, and in several trips to the Lis and back, the wily wok collects food, toys, and money, which Ming and his parents joyfully distribute throughout their community. The well-paced, repetitive text reads aloud well, but young listeners will want to crowd in close to enjoy the details of holiday bustle in the appealingly packed acrylic paintings. An author's note about the tale's inspiration and Chinese New Year, as well as a recipe for stir-fried rice, close this festive offering. Copyright 2011 Booklist Reviews.

Set in long-ago China, this story tells of Ming Zhang and his poor but deserving family. On New Year's Eve, Ming buys a magical wok, which promptly sets out to transfer riches from the greedy Li family to the Zhangs, who share it with others. The detailed, vigorous illustrations reflect the mischievous wok's energy. A recipe and Chinese New Year festival facts are appended. Copyright 2011 Horn Book Guide Reviews.

Inspired by the Danish folktale, The Talking Pot, Compestine's (Boy Dumplings) jaunty story takes place long ago in Beijing, which Serra (A Pirate's Night Before Christmas) portrays as a bustling, cheerful village. On Chinese New Year's Eve, a poor couple send their son to market to trade their last eggs for rice so they can make a meal for their neighbors. Instead, Ming swaps the eggs for a smiling, singing wok that boasts, "I am more than what you see!" The wok hops off to the home of a stingy rich family whose servants fill it with food, then delivers the feast to the needy family, chanting, "Skippity-hoppity-ho!/ To the poor man's house I go." After the sneaky wok brings them the greedy rich son's toys and gold the man has cheated others out of, Ming's family shares their bounty with poor villagers. The sight of the insouciant wok carrying away the miserly family—stuck inside headfirst, legs waving in the air—will make kids snicker. They'll also chime in, since the wok's refrain begs for audience participation. Ages 6–8. (Jan.)