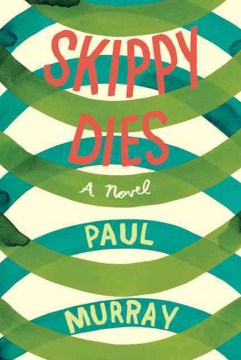 *Starred Review* It's no spoiler to acknowledge that Skippy, the main character in Murray's second novel, does indeed die, since the boy is a goner by page 5 of the prologue. Following his character's untimely demise, Murray takes the reader back in time to learn more about the sweetly engaging Skippy—a 14-year-old student at a historic Catholic boys' school in Dublin—and his friends Ruprecht, a near genius who is passionately interested in string theory; Mario, a self-styled lothario; and Dennis, the resident cynic. We also meet the girl with whom Skippy is hopelessly in love, Lori, and his bête noire, Carl, a drug-dealing, psychopathic fellow student who is also in love with Lori. The faculty have their innings, too, especially the history teacher Howard (the Coward) Fallon, who has also fallen in love—he with the alluring substitute teacher Miss McIntyre. And then there is the truly dreadful assistant principal, Greg Costigan. In this darkly comic novel of adolescence (in some cases arrested), we also learn about the unexpected consequences of Skippy's death, something of contemporary Irish life, and a great deal about the intersections of science and metaphysics and the ineluctable interconnectedness of the past and the present. At 672 pages, this is an extremely ambitious and complex novel, filled with parallels, with sometimes recondite references to Irish folklore, with quantum physics, and with much more. Hilarious, haunting, and heartbreaking, it is inarguably among the most memorable novels of the year to date. Copyright 2010 Booklist Reviews.

Yes, 14-year-old Skippy, a student at Dublin's exclusive Seabrook College, does die, and the fault could lie with his drug-dealing rival in love, his school's modernizing headmaster, or his friend -Ruprecht, who's looking for a portal to a parallel universe. A dark comic novel that's receiving raves in the UK-it's been called gigantic, marvelous, witty, and heartbreaking, and that's just in one review-this lead title is being compared to History Boys. For every smart reader ready to jump beyond Harry Potter. Copyright 2010 Reed Business Information.

At Dublin's Seabrook College, Skippy survives the daily indignities common to a boarder's life in an elite boys school. Still, something's wrong. Why does he want to quit the swim team? Why are his grades slipping? And who's the dark-haired St. Brigid's girl Skippy is always trying to spy on with his roommate's telescope? Seabrook is the world in miniature, and its gates threaten to burst from the hugger-mugger of cruelty, scandal, and materialism teeming within. It takes Skippy's tragic death and a sequence of events both hilarious and horrifying to recover the consolations provided by sympathy and friendship. Whether these will be enough to redeem Seabrook remains anyone's guess, though Murray suggests that a fleeting sense of grace may be all we can hope for and more than we deserve. VERDICT Murray's second novel (after An Evening of Long Goodbyes) is almost flawless, a gift for fans of character and plot. In addition to his masterly use of James Joyce and Robert Graves throughout, Murray has created a social realism that holds its own with that of Dickens. Skippy Dies deserves to be widely read and loved. [Also available as a three-volume paperback boxed set, ISBN 978-0-86547-948-7, $30; see Prepub Alert, LJ 4/15/10.]—J. Greg Matthews, Washington State Univ. Lib., Pullman

While there is an undeniable similarity between this long novel and another popular series featuring an adolescent protagonist who, along with his friends, gets into all kinds of mischief at a haunted boarding school, the two works couldn't be more different; this is a decidedly adult novel. The primary plot charts the brief life of 14-year-old Daniel "Skippy" Juster, a student at Seabrook Academy, an elite junior high school in Dublin. Skippy is smitten with Lori, who attends the neighboring girls' school, but has a problem: Lori's sort of boyfriend, Carl, is a sociopathic drug dealer. Another major narrative follows Skippy's history teacher, Howard "The Coward," a man equally infatuated with WWI and Miss McIntyre, a fellow teacher. With dark humor, Murray examines adolescent sexuality in an age of texting, video games, and the casual use of pharmaceuticals. Murray nails the banter of junior high, the nuance of middle-age yearning, and the excitement of string theory, and shows mastery in weaving disparate elements into a cohesive and engaging narrative. This is one of the darkest and funniest novels in recent memory. (Sept.) Copyright 2010 Reed Business Information.

Anything is possible: fictionStrout, Elizabeth