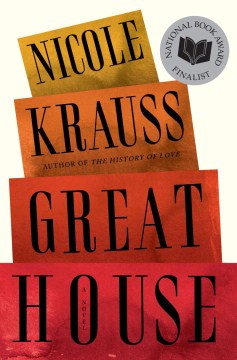 "*Starred Review* Krauss, in her follow-up to the best-selling History of Love (2005), tells her story entirely through the voices of her characters. All of the elements of literary fiction are conveyed through the monologues of five people: a writer from New York, an angry Jewish father from Jerusalem, an American woman studying in Oxford, the baffled husband of a Holocaust refugee, and an éminence grise who wraps things up—but not too tightly. Readers follow the trail, set forth in straightforward narrative and flashbacks, of an immense desk, which casts its shadow (sometimes literally) over the lives of all five characters. The plot is intricate and rewards careful reading. Krauss' masterful rendition of character is breathtaking, compelling, and reminiscent of ZZ Packer at her very best. In addition, the points of view of the various narrators, taken as a whole, present a broad picture of plot and motivation. Thematically strong, Great House examines the daily survival of Jews and demonstrates the destructiveness of lies and secrets within families. This tour de force of fiction writing will deeply satisfy fans of the author's first two books and bring her legions more." Copyright 2010 Booklist Reviews.

In America, a novelist uses a desk inherited from a poet who disappeared during Pinochet's regime in Chile. In London, a man uncovers something shocking about his wife, while in Jerusalem an antiques dealer carefully reconstructs his father's study, ransacked by the Nazis. And it all connects. Fans of Krauss's The History of Love truly worship it, and they'll be waiting. With a reading group guide and 12-city tour. Copyright 2010 Reed Business Information.

In this latest from Krauss (The History of Love), a huge old desk with many drawers becomes the symbol of love and loss for a host of characters from different countries and time periods. There is the New York woman who has written all her novels at the desk, which she was keeping for a Chilean poet who has since disappeared. Then there are the poet's daughter, who comes back years later to claim the desk; the antiques dealer who tracks down meaningful items from people's pasts; the brother and sister who live isolated in a Jerusalem home filled with other people's furniture; the elderly couple in England who live with the desk and a horrible secret; and the dictatorial father who desperately tries to understand his creative son. VERDICT While each character's story is engrossing, the connection among them is at times impossible to follow. Still, Krauss deals with heavyweight themes—the Holocaust, the different ways people cope with suffering, the special cruelty of fathers, the costs of creativity—with meditative, insightful prose that makes for an intense and memorable reading experience. [See Prepub Alert, LJ 5/15/10.]—Joy Humphrey, Pepperdine Univ. Law Lib., Malibu, CA

This stunning work showcases Krauss's consistent talent. The novel consists of four stories divided among eight chapters, all touching on themes of loss and recovery, and anchored to a massive writing desk that resurfaces among numerous households, much to the bewilderment and existential tension of those in its orbit, among them a lonely American novelist clinging to the memory of a poet who has mysteriously vanished in Chile, an old man in Israel facing the imminent death of his wife of 51 years, and an esteemed antiques dealer tracking down the things stolen from his father by the Nazis. Much like in Krauss's The History of Love, the sharply etched characters seem at first arbitrarily linked across time and space, but Krauss pulls together the disparate elements, settings, characters, and fragile connective tissue to form a formidable and haunting mosaic of loss and profound sorrow. (Oct.)