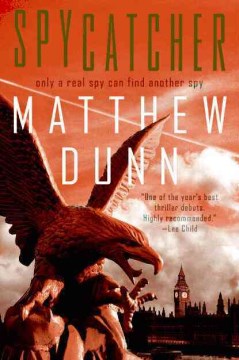 Will Cochrane is Spartan, MI6's top agent. Armed with any weapon—or unarmed—he's lethal, "impeccably ruthless," quick to anger and disobey his controllers, and emotionally scarred by a life defined by extreme violence. Within days of being shot three times, he's assigned by MI6 and the CIA to stop an imminent "genocidal" attack at an unknown location by an unknown terrorist believed to be a general in the Iranian Revolutionary Guard. Racing across Europe, he learns from a beautiful Arab woman that his target calls himself Megiddo, and Spartan develops a plan to draw Megiddo out, kill him, and thwart the attack. Along the way, he falls in love with the woman and gets shot two more times. First-novelist Dunn, a former field operative for MI6, has a flair for scenes of mayhem, and he lovingly identifies every weapon used to induce it. Some readers will happily suspend disbelief and enjoy the ride. Others may question whether anyone could survive five bullet wounds in a few weeks' time and then swim 100 meters underwater during an Adirondack blizzard. Copyright 2011 Booklist Reviews.

A veteran agent who reports to both M16 and the CIA but feels beholden to neither, Will Cochrane suddenly has a mission: to wipe out Megiddo, a former Iranian Revolutionary Guard and current international terrorist, who is responsible not only for doing in a valuable contact but for killing Will's father many years ago. One cold night a month back, I settled down with this and found the writing intriguingly brusque and elliptical and the cat-and-mouse game a real surprise. Definitely investigate, especially for readers who want not so much techno as an icy-edged psychological thriller. With a 150,000-copy first printing.

Will Cochrane is an arrogant, physically and mentally superior secret agent recognized as a dangerous wild card by the chiefs of Britain's MI6 intelligence agency and the CIA. He is tasked with saving humanity from monstrous terror plotted by a mysterious Iranian. But Cochrane also has a personal agenda for catching this man—to avenge his agent father's death in Iraq 25 years ago. Despite his repeated failures, Cochrane's supporting cast is faithful and competent. A bulked-up version of 007, our spycatcher suffers an impressive collection of personal wounds while amassing an astonishing body count of evildoers. Dunn, himself an ex-MI6 agent and writing under his real name, reveals few of his agency's operational techniques, subsuming them under the unique methods of his protagonist, who is both restrained and hard-driven as much by vengeance as by duty. VERDICT This very uneven novel features a pace that seesaws between leisurely and frantic. The literary style and level of violence is comparable to David Stone. Dunn eschews sex, but indulges occasionally in 007-ish mentions of five-star hotels, powerful motor cars, fashionable dress, and trendy beverages. Recommended for spy fiction enthusiasts. [See Prepub Alert, 1/31/11].—Jonathan Pearce, California State Univ. at Stanislaus, Stockton

British author Dunn draws on his real-life experience as an MI6 agent for his strong spy thriller debut. MI6 agent Will Cochrane, code name Spartan, winds up shot after a New York City mission involving an Iranian intelligence source goes bad. After a brief stay in a secret hospital, he takes on a new task—locating the mastermind of Iran's Islamic Revolutionary Guard Corps, who's planning a massive terrorist attack. Will tracks down freelance journalist Lana Beseisu, who's now living in Paris and rumored to be the terrorist leader's one-time lover. Will and Lana form an alliance and an instant attraction, though Will knows he has to keep his hands off this beauty until the mission's successful completion. When Will learns that the Iranian terrorist was responsible for the death of his own father, revenge helps fire his search. While some predictable plot twists suggest Dunn is still learning his fictional craft, readers will want to see more of his distinctive hero, "the ultimate killer of killers." (Aug.)